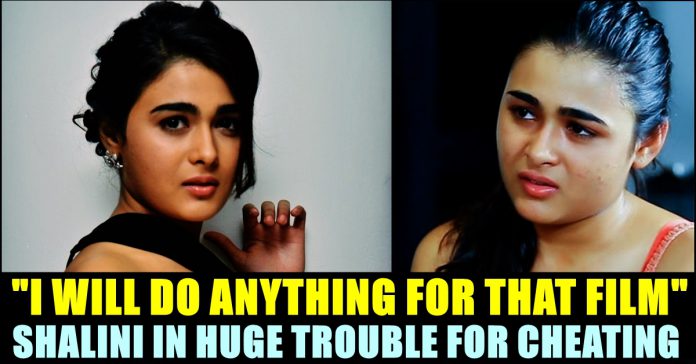 Shalini Pandey is a popular heroine among Tamil audience though she hasn’t appeared in many Tamil movies. Her debut film Arjun Reddy, in which she acted along with Vijay Devarakonda gained her the familiarity across the country. However she hasn’t got the opportunity to act in any of the remakes of Arjun Reddy.

“Gorilla” and “100 % Kaadhal” are the two of the only Tamil films Shalini worked, in which she paired along with Jiiva and G.V Prakash respectively. Both the the films failed to make an impact in box office which led the actress to concentrate in other language films. Now the actress found herself in big trouble it seems.

Amma Creations owner and producer T.Siva has filed a case against Shalini Pandey for cheating. Earlier it was reported that the actress got committed in “Agni Siragugal” produced by T. Siva. The film which was being directed by “Moodar Koodam” fame Naveen, has Arun Vijay and Vijay Antony in the lead roles. Producer says that they chose Shalini Pandey to do an important role in the film which is equal to the male leads.

Regarding the complaint producer Siva says that they committed Shalini for 35 lakhs who received just 10 lakhs for her debut film 100% Kaadhal. “We required 80-100 days of call sheet from her. We shot for 27 long days by having her as the lead. As Vijay Antony and Arun Vijay are busy actors, we scheduled 40 days of their combination dates and informed Shalini about the dates. Suddenly she said that she wants to adjust dates due to the opportunity she received from Bollywood to act with Ranveer Singh.” said T. Siva to Indiaglitz.

Siva further says that Shalini signed the project with complete willingness. “When I tried to convince her to act in my project, Shalini said that she is going to act in that project, irrespective of the consequences. She said that her lifetime ambition is to do Bollywood films and is ready to face the consequences to act with Ranveer Singh.” said Siva who added that the even said that won’t leave that film at any cost. “I know I am ethically wrong, you call me selfish, I don’t mind If you think I’m selfish” said Shalini Pandey according to T. Siva.

Listen to the phone call conversation of him below :

The film Shalini is going to pair with Ranveer titled as “Jayeshbhai Jordaar”. The makers revealed Ranveer’s first look in the film few days ago and announced the female lead opposite Ranveer.

What do you think on this attitude of the Arjun Reddy actress ?? Comment your views below !!

A report about the family members of student Srimathi demanding compensation from the government has been surfaced in the internet platforms. A video showing...

Oscar winning musician A. R Rahman's reply to a video tweet uploaded by Prime Minister Modi is getting special attention from users of Tamil...

Followed by Varun Dhawan, many other celebrities including Chinmayi, Indhuja, Pia and others called out a meme page which tried to get engagement by...