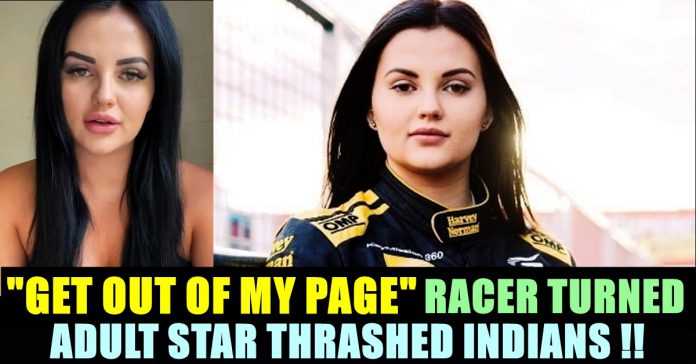 Renee Gracie, a popular Australian car racer who recently turned as porn star to gain more money, slammed Indian users for stealing her images from a paid site and spreading it in other social media platforms for free. Being a 25 years old youngster, Renee faded away from the track sometime in 2016-17. Her racing career peaked in 2015 when she teamed up with Swiss racer Simona de Silverstro at Bathurst 1000. Rene’s best results in her debut Supercars racer was a 12th placed finish where she ended up 18th in the championship standings. She has recorded a top 10 finishes in 17 races. Recently, she has decided to quit racing to pursue a career in the adult film industry.

Out of ideas for captions.

As soon as she took this decision, the news went viral and her name was searched by enormous number of people in India with search terms such as “Renee Gracie Hot” etc . The actress saw a big progress financially due to this decision and became super active in the adult film industry, according to reports. Now, Renee Gracie, in her Only Fans page account which requires $12.95 (1000 rupees approx.) for 1 month subscription, uploaded a post slamming Indians for a bizarre reason.

In her long post, Renee has said that she no longer likes Indian users and is planning to remove them from her page. On the adult subscription site, she wrote “To all you Indian a** holes on my page. Stop stealing my pictures” to express her frustration. Renee highly believes that Indians are stealing her “revealing” images and videos and are creating fake profiles by using them. As the posts and videos she is uploading is exclusively meant for her paid subscribers, Renee threatened to sue Indian users who are involving in such act.

“If you are Indian, get off my page. You are not welcome here any more” the actress wrote after realizing that her pictures went viral in India. “Ever since my story went viral in India, there has been so many videos and fake profiles made and images stolen illegally from my Onlyfans account” her post read which further added “I will be removing all Indians from my page tonight”

As said, OnlyFans is just another platform like Facebook and Twitter where we have to pay money to the creator whom we follow. The site is very much popular in the adult film industry. Reports suggests that Gracie made $3000 dollars which is equal to 2,28,000 rupees of Indian currency in the first week by just selling her nude photographs as an adult star. On realizing that she is losing her income due to few Indian users who are spreading it for free in other sites, Renee lashed out at them it seems.

Do memory foam mattresses wish they could forget?

Earlier, on switching the career, Renee said that this career is helping her financially very well comparing to her previous job. She even added that she hasn’t found anything odd about the nature of her new job.

“It has put me in a financial position I could never have dreamed of and I really enjoy it,” Gracie told an Australian Daily. “I am fine with whatever they want to call me. I am earning good money and I am comfortable with where I am at” she added. Rene even told to media that she entered adult film industry with the permission of her family members. Renee added that the financial crisis she was facing due to her car racing career is the reason behind her decision.

This Kollywood Celebrity Says That He Would Definitely Do What Simbu Said In The Video !! Watch !!

Simbu's recent video of him requesting his fans to celebrate "Vantha Rajavathaan Varuven" release like never before is now a viral video as we all...