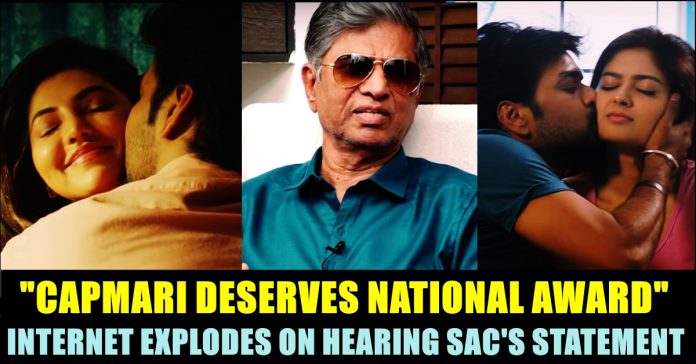 The film “Capmari” released recently and shocked the fans of Tamil cinema for its adult content and double meaning dialogues. What’s more shocking is that the directorial credits of the film belongs to director S.A Chandrashekar, ace filmmaker and father of actor Vijay.

S.A Chandrasekar is one of the very few experienced filmmaker in Tamil film industry who are currently working. In his 40 year long career, Chandrasekar made many impactful movies and mainly introduced his son Vijay who is one of the leading actors of South India now.

The director who made 70 movies throughout his career, introduced Vijay in Naalaya Theerpu. Some of his notable movies are Sattam Oru Iruttarai, Naan Sivappu Manithan, Nenjirukkum Varai etc. He recently made a movie titled as “Capmari” by having actor Jai in the lead. The film marked the filmmaker’s 70th movie and had Athulyaa, Vaibhavi in supporting roles.

The film which was given “A” certificate by censor board hit the screens recently and is running well. The trailer of the film suggested the audience that the film is going to be a romantic comedy about a man who got married to two women.

The film didn’t make much impact in the box office and received mostly negative reviews from the audience. Meanwhile an old interview of S.A Chandrasekar who made the film is going viral now across the internet. In the interview which was given before the film’s release, S.A.C was seen saying that the film deserves national award.

When one of a follower asked S.A Chandrasekar why he is tarnishing the good name of actor Vijay. To that the filmmaker asked the online user to watch the film before making comment on it. When another user compared compared with popular adult movie “Iruttu arayil Murattu Kuththu”, the filmmaker said that the film has beautiful story and it won’t look absurd while watching along with the story.

Further he added that there is no wonder if the film wins a national award. Check out his statement in the below video :

Though it is an old interview, it is going viral now among netizens. Many trolling the filmmaker for his baseless statement. Check out some of their reactions below :

In the early 2000s, Chandrasekhar slowed down his work as a director and focused on business interests, including on the construction of a three star hotel for his son. In 2000, he began pre-production work on a film titled Dhoosi with Sarathkumar but the project was later shelved.

He turned as the lead actor at the age of 70 in Touring Talkies which is also his last directorial venture. With Nayyapudai , is the veteran’s second attempt in heroics. S. A. Chandrasekhar is back after a break with a biopic on social activist Traffic Ramasamy.

Have you watched the film Capmari yet ?? Comment your views below !!

Previous articleOFFICIAL : Not Vijay Or Soori, Vettri Joins This Top Hero !!
Next articleBlue Satta Took Revenge For Trolling Him In The Movie ??

India lost the first test match against England that took place in the Chepauk stadium of Chennai. The poor display of batting performance from...