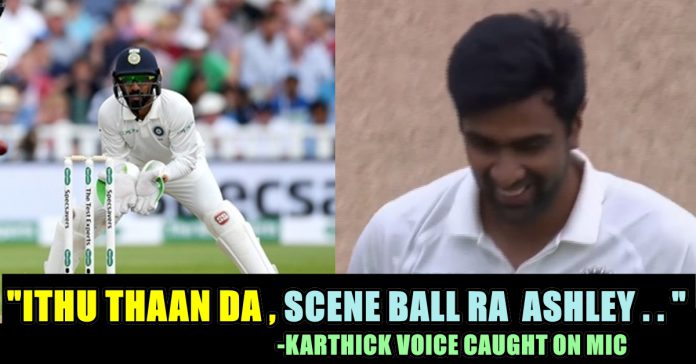 Can’t Keep Dinesh Karthick Away From Talking Tamil In Mic !! This Video Is An Absolute Bliss !!

Are we past our days of listening to MS Dhoni’s constant banter over stump-mic, making cheeky digs at his fielders and unsettling batsmen using Hindi? I guess not, after listening to what has transpired in Day 1 of the first Specsavers Test between India and England at Edgbaston, where Dinesh Karthik and R. Ashwin took the stump-mic game to a whole new level. This time, it was probably not just the England batsmen who were confused, as the Tamil they used might have baffled quite a few of the Indian fielders as well. Have a listen at this video below, and while you’re at it, the Tamil-non-speaking readers can also thank Sony and ESPN for providing accurate subtitles which will help you know how insightful Karthik and Ashwin were throughout the whole event.

With Kohli introducing Ashwin as early as the seventh over, the ball was relatively new and Ashwin wasn’t getting the turn he expected out of his default off-spinners. Karthik can be heard asking the bowler to maintain the same length for Alastair Cook and keep pitching the ball in-line with the stumps, requesting patience as “things will happen” and the ball will turn eventually, hoping for an LBW if the ball evaded the bat and pounced on Cook’s legs. He was also heard asking Ashwin not to ball short to the batsman as he was “tall” and so the “length needed to be kept up to him”. Karthik’s advice worked as a charm as Cook was eventually bowled by Ashwin after a long flurry of mixed-up deliveries, most of them pitching in good length in line with the stumps and then turning either way. He used a regular off-spin that pitched in line with Cook’s middle stump and then turned away, plucking the off-stump in the process. As Karthik pointed out on another occasion, he (Cook) was “not getting (to read) Ashwin’s balls”. Even after Cook’s dismissal, Karthik continued to control almost every aspect of Ashwin’s bowling – be it the flight, the length or the line. He never forgot to laud a good ball or report a poor one, as Ashwin came out as the top bowler at the end of the day, picking up four wickets for 60 runs in 25 overs, as Ben Stokes, Jos Buttler, and Stuart Broad became his victims after Cook.

This continued in second innings as well. Check out the video below :

Previous articleMega Update : Bahubali Prequel In Netflix !! Everything You Need To Know Is Here !!
Next articleYouth Who Abused Police In His Video For Pregnant Lady Death Arrested !! Usha Died In March !!

Income Tax department officers has found Rs.65 Crores during raids on the powerful financier in the Tamil film industry, according to NDTV. It is...