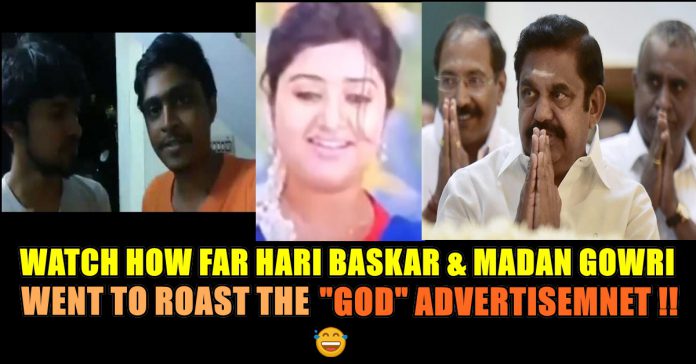 On hearing the response of the lady, the entire theatre erupts in laughter and boos at the screen. Memes have also taken over the internet making fun of the Tamil Nadu CM.

Many feel that the advertisement is an attempt to accord a God-like status to CM E Palaniswami similar to that of former CM Jayalalithaa and MG Ramachandran. It is said that Palaniswami feels that he does not have his own ‘fan base’ and is largely seen as living off late Jayalalithaa’s legacy.

After a government-commissioned advertisement about Tamil Nadu Chief Minister Edappadi Palaniswami left moviegoers in the state in peals of laughter, it has been pulled off.

The “God” Advertisement Of Edappadi Palaniswamy Is Removed In Theatres: The Reason Behind Is Even More Silly !!

On removing the advertisement Minister of Fisheries D Jayakumar said, “We brought it to the Chief Minister’s attention and an order to remove it has been given. If you go to theatres now, you won’t see it,”. The video of the advertisement went viral on social media, making the Chief Minister the butt of jokes. Meanwhile Youtube stars Hari Baskar and Madan Gowri uploaded a video in which they seemingly watching the ad in cell phone. After the video finished they made a  joke on the advertisement. Watch it here :

Previous articleNo Matter You Watch IPL Or Not !! : You Must Watch This Stunner From De Villiers !!
Next articleVignesh Shivan Angry Reaction On Yogi Babu For Romancing Nayanthara !! : Didn’t Expected !!

Second Of The Two Tunnels Of CMRL, In North Chennai Is Now Complete

Chennai Metro Rail Limited (CMRL) on Tuesday completed tunnelling work to connect North Chennai with the other parts of the city through metro trains. Applause to...