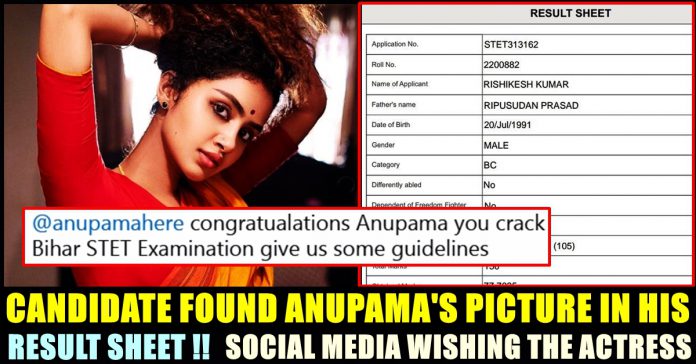 Bihar’s education department released the result for the Secondary Teacher Eligible Test, 2019, recently. In an unexpected turn of events, a student happened to witness his result sheet with actress Anupama Parameshwaran’s picture attached to it. The result which contains the scores in three subjects Urdu, Sanskrit, and Science under Paper-1 of STET, 2019, is of a candidate named Rishikesh Kumar but had a picture of “Premam” fame Anupama Parameshwaran instead of his.

Results of the STET were declared in March 2021 but the scores of three subjects were not updated due to technical issues. As soon as the bizarre result surfaced in Internet, candidates who had appeared for the examination started alleging that large scale malpractices have been done in preparing the results of STET. The viral video clip which is doing rounds shows, all the credentials filling in correctly, from the name to date of birth.

While scrolling down, instead of Rishikaesh’s photo, the result shows the picture of Anupama Parameshwaran. It also got featured in the final result sheet. “I contacted the department for rectifying the mistake but no one heeded my request.” said Rishikesh while speaking to the media. It is notable that it is not the first time such incident is taking place as the picture of actress Sunny Leone popped up in a result sheet of a candidate earlier.

Tejashwi Yadav, the Leader of Opposition in the Bihar Assembly, on seeing the viral clip, questioned the administration and targeted the state government over the incident. He said that no vacancy in Bihar is being filled up without malpractices. Watch the video below :

Responding to Tejashwi’s allegation against the Bihar government, the ruling Janata Dal leader Ghulam Gaus said that “small mistakes keep happening”, especially when the results are being announced for a large number of students. “The mistake will be rectified and we are trying our best to provide employment to a large number of people in the state,” he said in a statement.

Candidates who are successfully qualifying in the STET paper 1 are eligible to teach classes 9 and 10 whereas candidates who qualify in paper 2 could teach the students of classes 11 and 12. Check out some of the reactions that surfaced in social media platforms for this result :

The news of the picture of South's heroine Anupama Parameshwara in the STET result went viral. Earlier Sunny Leone had become an engineer, now Anupama was a teacher. ☺️️ congratulations @anupamahere ji welcome in Bihar😍 pic.twitter.com/JXIzSB3kkG

Previous articleYoung Actress Replied To A Follower Who Compared Her With Hansika
Next articleOnline Fans Are Worrying About The Followers Count Of Yuvan’s Instagram Account !!

Amala Paul’s Savage Reply To A Follower Who Made An Obscene Comment !!

Actress Amala Paul's reply to a follower who made an obscene comment in her recent social media post is going viral. The actress who...

Emerging Pan Indian star Samantha Ruth Prabhu, on Saturday, came up with a message wishing her former brother-in-law Akhil Akkineni for his birthday. The...