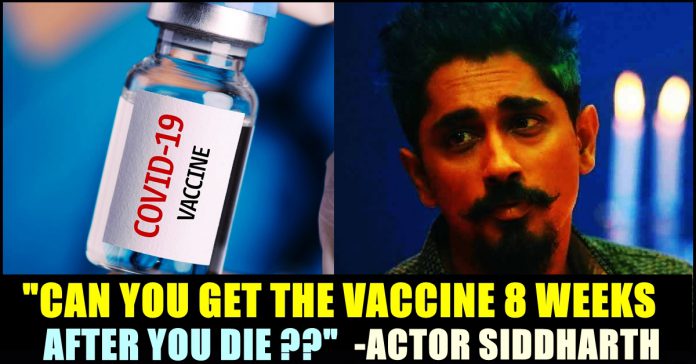 Tamil actor Siddharth’s sarcastioc tweet about not receiving the second shot of vaccine has garnered wide reach in a short span of time. The “Rang de Basanthi” actor who has been raising voice against the Narendra Modi-led government, questioned whether people would get their second shot of vaccine 8-12 weeks after their death. Once again, his anti-Modi tweet received wide range of positive reactions with the supporters of BJP abusing him.

Indian had made and exported more vaccines than any other country for years. Yet its vaccination drive against Covid-19, which began in early January, is stumbling and faltering. On the ground, people are being turned away from vaccination centers because the shots are out of stock. In Mumbai, the city corporation suspended vaccinations altogether for three days. Other states postponed their plans to vaccinate citizens aged 18-45. according to a recent report, only 28.9 million Indians had received both their doses. Around 200 million are awaiting their second shot, and 600 million are eligible for their first one.

In state Tamil nadu, health secretary Dr. J Radhakrishnan said that the vaccines ordered by the state had not yet arrived and there was uncertainty about when they would arrive. The statement was made a day before the beginning of vaccination for those aged between 18 and 44. Reacting to it, actor Siddharth who has been voicing out against the central government since the emergence of COVID 19 second wave, had came up with a tweet asking “Vaccine Enga Da Dei ?”

Can you get the second shot of vaccine 8-12 weeks after you die?

Earlier, he also urged people to get vaccinated by demanding it to the government and requested them to be safe. “Please avoid overcrowding in vaccine centers. Protect yourself and those around you. Register for the vaccine, and I hope and pray and you must demand you get it soon. The faster this government vaccinates us the safer we are. Spread the word. God be with us all.” his tweet read.

Please avoid overcrowding in vaccine centers. Protect yourself and those around you. Register for the vaccine, and I hope and pray and you must demand you get it soon. The faster this government vaccinates us the safer we are. Spread the word. God be with us all.

Despite of the support he is receiving for questioning the government through his bold tweets, He who got threatened by the Tamil based BJP supporters, received abusive comments from them. Read : “I Will Not Shut Up, Keep Trying” – Actor Siddharth !!

Previous articleRaiza Opened About How She Regained Her Old, Glowing Skin !!
Next articleReviewer Prashanth & Kishore K Swamy Argue Over The Recent Activities Of Udhayanithi Stalin !!

Fans Got Upset On Seeing This Official Replacement Of “Mullai” In Pandiyan Stores !!

Fans and followers of Pandiyan Stores mega serial got upset on seeing the official replacement of "Mullai" announced by Vijay television. They are expressing...