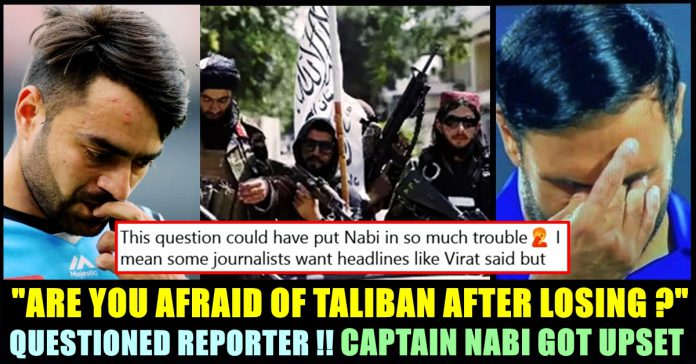 “Can We Talk About Cricket ?” Afghanistan Captain Mohammad Nabi Shuts Down A Reporter !! WATCH

After Indian skipper Virat Kohli, Mohammad Nabi, captain of Afghanistan team lost his temper at the press meet after he faced a “Political” question from one of the reporters. Though the players of the team are trying to focus on the ongoing biggest ICC tournament, questions regarding the Taliban ruling government continue to haunt them. They have been continuously dealing with questions surrounding the affairs back home ever since Taliban took over the country earlier this year.

On Friday, after playing with team Pakistan, Afghanistan skipper Mohammad Nabi left bemused over a question asked by one of the reporters. To express his displeasure, the cricketer asked the reporter to ask questions related to cricket and made the moderator of the press meet to shut the reporter down. Video of the same is doing rounds in social media platforms with reactions appreciating Nabi for holding his nerves and keeping his emotions in check.

After a good fight, team Afghanistan lost the game against Pakistan after failing to restrict the team from scoring 147 runs in 20 overs. Wickets fell for Afghanistan in regular interval but Asif Ali smashed 4 sixes in the 19th over bowled by Jannath. When the team needed 24 runs from 12 balls, Asif finished the match with one over to spare. However, team Afghanistan faced laurels from fans of game cricket for the performance they displayed.

However, after the 5 wickets loss, captain Mohammad Nabi participated in the press meet and answered to the questions of the reporters. To everyone’s shock, a reporter went on to ask if the Afghanistan cricket team fears being questioned by the Taliban government regarding their performance after they return back home. “Afghanistan have played very well and they have won two matches. Is there any kind of fear that when you return home, you will be questioned as the government and situation have changed ?” the reporter asked Nabi.

It is very well known that the Taliban’s arrival to Afghanistan, in fact, was duly backed by the Pakistan government. “In this new era, Afghanistan share a healthy relation with Pakistan. Do you feel that the Afghan government will be strengthened because of this ?” the reporter continued asking. Nabi who got visibly upset, replied asking “Can we talk about cricket leaving aside the situation ?”

“It would be better if we talk about cricket. We are here for the World cup after taking proper preparations. You may ask any question related to cricket” Nabi replied. Watch the video below :

Moderator of the press conference intervened and stopped the reporter from asking such questions. However, the reporter argued that he was asking cricket related question to which Nabi replied back saying that it wasn’t. Nabi left the press conference as soon as the controversial episode ended. Many users of Internet slammed the press reporter who had the courage to ask such questions to Nabi. Earlier, Indian Captain Virat Kohli expressed his displeasure over a reporter who questioned about Rohit Sharma’s existence in Indian team.

What a stupid question to @MohammadNabi007 .. I am sorry dear NABI you responded gracefully…
pic.twitter.com/anzYY7NAsm

This question could have put Nabi in so much trouble🤦 I mean some journalists want headlines like Virat said but even for that this is extreme level https://t.co/8mbmFI4Fme

Why journalist. Why?? And unfortunately it is again

Whoever this journalist is a disgrace to journalism and cricket – and all respect for Muhammad Nabi for handling the situation gracefully. Respect and love 💗 pic.twitter.com/ICpCQV3hjs

Previous articleIs This The Real Reason Behind Puneeth’s Demise ?? READ
Next articleSuper Singer Fame Malavika Replied To Her Followers Who Questioned About Her Marriage !! WATCH

Entire Film Industry Comes In To Support Bhavna After She Accused Actor Dileep Of Molesting Her !!

On Monday, famous south Indian actress Bhavna menon broke her silence about the trauma she is going through ever since she became a victim...

“Can We Talk About Cricket ?” Afghanistan Captain Mohammad Nabi Shuts Down A Reporter !! WATCH

After Indian skipper Virat Kohli, Mohammad Nabi, captain of Afghanistan team lost his temper at the press meet after he faced a "Political" question...