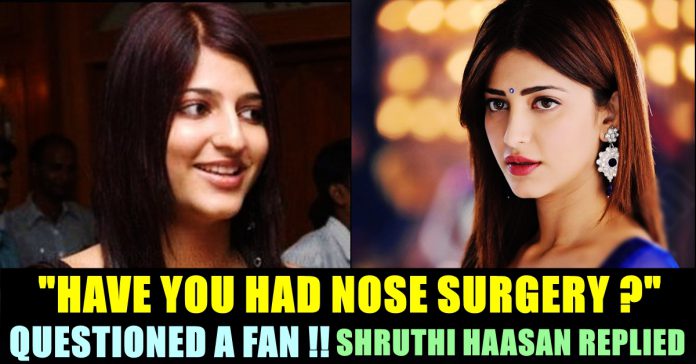 While answering to her Instagram followers through a True or false session, Shruthi Haasan opened on her “nose surgery” and asked people to move on from it. The actress who is pretty much active in social media platforms, also answered to many other complicated questions of her followers and fans.

Being a daughter of India’s popular iconic celebrity, Shruti Haasan earned herself a name through sheer hard work. She happens to be one of the most active celebrities in social media platforms as well. Having more than 1 crore and fifty lakh followers in Instagram, Shruti never missed to engage her followers by uploading pictures from her photo shoots and by conducting chat sessions with her followers.

After appearing in couple of her father’s films as a child artist, Shruthi Haasan made her Tamil debut as heroine 7 aam arivu and continued to act in film films like 3 with Dhanush and Vedhalam with Ajith Kumar. Shruthi who has posted 2049 posts in Instagram, on Sunday. conducted true or false session with her followers.

In that session a follower asked the actress whether she is hating her ex-boyfriend with whom she got break up recently. “I actually don’t hate anybody, it’s just too much deep emotions” Shruthi said and another follower asked whether she had a nose surgery.

After thinking for a while, Shruthi answered, “Yes, it’s only been about 11 years. so can we move on please”. She also answered to a follower who asked whether she is suffering from pcos. Watch the video below :

Earlier, while replying to a number of followers who criticized her for having a plastic surgery, Shruthi Haasan lashed out at them through a long post in Instagram. Shruthi said that she is not the one who gets driven by the comments of people but their comments on her posts such as “she’s too fat now she’s too thin” is so avoidable, the actress said. Shruthi further said that she is trying hard to have healthy relationship with her hormones. The actress said that the pain she is going through is easy but feels alright to share her journey in her social media accounts.

Judging another person is not cool, says Shruthi in her post. She goes on to admit that she had a plastic surgery and says that it is the way she chose to live. The actress suggested her followers to spread love and be chill. “I’m happy to say this is my life my face and yes I’ve had plastic surgery which I’m not ashamed to admit. Do I promote it ? No am I against it ? No – it’s just how I choose to live.” the actress wrote in her post.

Previous articleA.R Rahman’s Reply To A Follower Who Criticized His Insta Post !!
Next articleGroping Without Skin To Skin Contact Is Not Sexual Assault ?? Court’s Judgment Caused Outrage