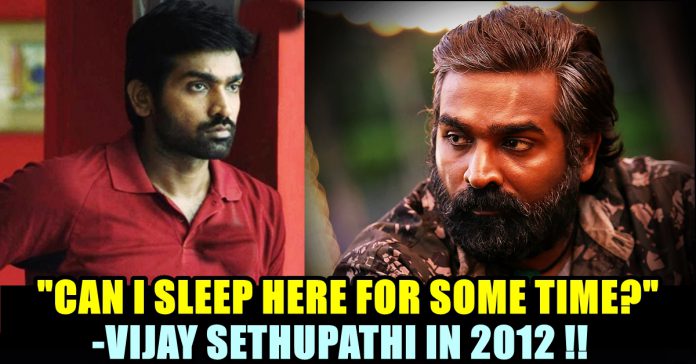 Vijay Sethupathi celebrated his 43rd birthday on 15th of January and the entire Tamil film industry came forward to wish him the best for his future endeavours. The film actor who is known for his humble nature and versatile acting, is currently having a dozen of films to complete. He is receiving accolades for his recently released “Master” in which he played a role of a ruthless villain manipulating kids for his illegal business. Now, a Facebook post shared by a film editor named Abhinav Sundar Nayak about Vijay Sethupathi is doing rounds in social media platforms.

Vijay Sethupathi, one of the busiest actors of Kollywood industry, loved by majority number Tamil cinema fans for his natural way of delivering performances. Irrespective of his market and fan base, the actor is portraying various characters and concentrating in content oriented films since his debut. He played a role of a transgender in TK’s Super Deluxe, 70 year old theatre artist in Seethakadhi, Police officer in Chekka Chivantha Vaanam , a gangster in Vikram Vedha. He also played villain for Super star Rajinikanth and Thalapathy Vijay so far.

On the special day of his birthday, editor Abhivan Sundar Nayak who worked in films such as “Uriyadi”, “Kurangu Bommai”, came up with an incident that took place during 2012. At that time, Pizza was not released and Vijay’s identities were “Thenmerku Paruvakaatru”, “Sundarapandiyan” and few short films.

Abhinavi, in 2012, moved to a small office/room for rent in Vadapalani, Chennai and was editing short films and corporate films. During an afternoon, Vijay Sethupathi reached his place in car. Before introducing himself, Vijay confirmed that he is talking to Abhinav and said that he is having a headache. The actor asked Abhinav whether he could sleep in his room for some time.

“He walked straight upto me and asked “Abhinav thaane? (You are Abhinav, right?)”. I was confused for a moment and nodded a yes. He continued, “Thala valikkuth, koncham neram inga thoongattuma?” read the Facebook post of Abhinav.

Abhinav let Sethu to sleep on a bean bag and the actor, after sleeping for an hour, asked Abhinav for a tea. “Sure” said the editor and handed over a cup of tea to Vijay who didn’t talk much. After drinking the tea, when Abhinav was about to take the cup back from him, Vijay stopped him and washed it himself.

“He quickly drank it and when I was about to take the cup back from him, he said, “Illa parva illa, naaney wash panren” and before I could say anything, he went upto the sink, washed the cup and smiled at me. I was clueless, but I smiled back. He then walked out of the main door with the same smile, saying “Thanks Abhinav, see you around.” and left.” Abhinav said through the post and informed that Pizza released after few months of that incident.

“A few months later, Pizza released. Then NKPK. A year later, Soodhu Kavvum. And the rest is history.” he concluded his post.

While answering to a follower in Twitter, Abhinav confirmed that Vijay Sethupathi could have known about him as he was known for his editing works in the short film circuit. As we all know, Vijay Sethupathi acted in a number of short films, directed by Karthik Subbaraj, Alphonse Putharen, Mani kandan and many other new age filmmakers prior entering tamil cinema.

“As I have mentioned in the write-up, I was editing short films during the time, & so was quite known for my work in the circle. VJS also has a short film background, so he may have known about me through his circle. That’s all I know. I don’t need to withhold any information.” Abhinav’s reply to the follower read.

As I have mentioned in the write-up, I was editing short films during the time, & so was quite known for my work in the circle. VJS also has a short film background, so he may have known about me through his circle. That's all I know. I don't need to withhold any information.

This incident shared by the “Uriyadi” editor proves that Vijay Sethupathi is a simple human being like every one of us who loves to make friends. No wonder that the actor is having a cool and attentive relationship with his fans.

Previous articleBalaji Murugadoss’s First Post After Coming Out Of Bigg Boss House !!
Next articleDheena Replied To A Follower Who Mocked Him For His Role In “Master” !!