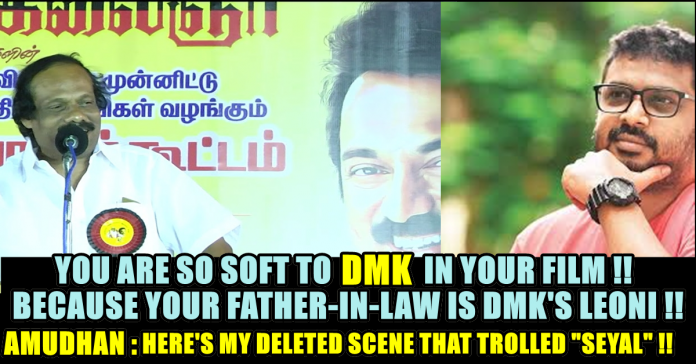 The Shiva-starrer, which parodied cliched plot devices and characters in Tamil cinema, is back for a sequel. Thamizh Padam 2.0 released on this thursday.

Through the saga of an aspiring film star, Thamizh Padam sent up every beloved plot device in Tamil cinema. The sequel sees Shiva takes on the Tamil Nadu police, one of the most overused professional groups in Tamil films. The cast of the Y NOT Studios production includes Iswarya Menon, Disha Pandey, Sathish, Santhana Bharathi and Manobala. “We have tried to maintain some continuity from Thamizh Padam,” Amudhan said. “Everything else is different. It is mounted on a much bigger scale than what we were able to afford before. I think this film will be a much bigger cinematic experience than the original. At the same time people are going to come into the theatre thinking it is a certain kind of a movie. We will have to surprise them again.”

Amudhan did not expect his first film to be such a success. “To be very honest with you, we were not very serious about the film,” he explained. “We did not think that the film was the beginning of our career or anything of that sort. I wrote it, pitched it, got it approved and the star got on board immediately. We did not have time to think. We shot it in one rush and released it almost immediately. We were not very careful [and did not] consider too many things before the film.”

As the film now is running successfully in theaters some of the people accused him for being soft to DMK, the leading political party of Tamilnadu. They also said that he is the son-in-law of Dindugul. I. Leoni who belongs to DMK, which led him not to troll them in his movie as he has trolled almost every leading politicians of Tamilnadu including Deputy Chief minister O. Panneerselvam, BJP’s H.Raja, Tamizhisai, Prime minister Narendra Modi etc. As one of the fan asked him this in the twitter the director answered him right away with 4 points. In he precisely says that he had an idea and also made a scene of imitating M.K Stalin’s unbuttoned appearance in a political event in which the leader would be seen posing to the medias with his shirt buttons off. He later removed it because of being bloated he reasons. He also suggests that there is nothing wrong with a filmmaker indulging his political ideologies in his film through his answer.

So Director CS Amudhan is DMK Dindigul Leoni’s son-in-law. Explains his biased stand not only on Twitter but also on his movies. Nevertheless, he’s a good film maker. While I just love Tamil Padam 2.0, I can’t ignore the allegation that you are soft on DMK @csamudhan You have indeed been very kind towards DMK and the great SEYAL

What do you think on C.S Amudhan’s statement ??

Previous articleA Video Of “Yogi Babu” Leaked By Varalakshmi From “Sarkar” Sets !! Vijay Comes In Cameo !!
Next articleSinger Chinmayi Bought A Brand New One Plus Phone & Highly Disappointed With It !! Bashes The Product !!

Third Promo Of Bigg Boss Show Delayed Because Of This Reason ??

On seeing Vijay TV delaying to telecast the third promo of Day 33, followers of the show are trolling the channel hilariously in...