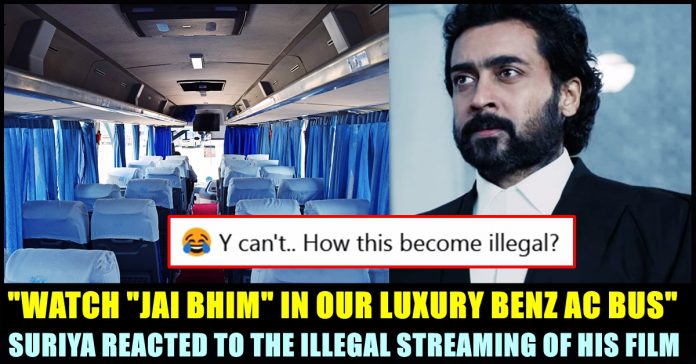 The official twitter handle of actor Suriya’s “2D Entertainments” came up with a tweet requesting people not to support the bus service that announced about streaming “Jai Bhim” to attract more passengers. Sharing the banner, the production house said that streaming the movie in public is illegal. 2D also warned people not to screen the film for commercial purpose and requested fans not to support such illegal activities.

The film received rave reviews from majority number of audience who watched it. Now, to our shock, a post from 2D entertainments of Suriya warning those who are using the film for commercial purpose has shocked fans. “Streaming the movie #JaiBhim in public is illegal. Necessary legal action will be taken against anyone screening the film for commercial benefits. We kindly request the #AnbaanaFans and loving audience not to support such illegal activities” read the post.

Streaming the movie #JaiBhim in public is illegal. Necessary legal action will be taken against anyone screening the film for commercial benefits.

We kindly request the #AnbaanaFans and loving audience not to support such illegal activities. pic.twitter.com/h0tqMYX9sN

Check out some of the reactions the post garnered :

@2D_ENTPVTLTD I have one doubt 🧐
If the bus owner owns Amazon prime subscription it is his wish show the movie to others right?

not everyone had a Amazon prime pack …. I think this is Good thinking …. Here is the only one thing that tooo a movie reach to everyone…….

If Amazon Prime Subscribers, Legally They can Screen and Watch.

Previous articleTrisha Getting Trolled For Her Opinion On “Feminism” !!
Next articleGautham Vasudev Menon’s Reply To Pa. Ranjith’s Tweet Shocked Fans !!

If you are not living under rock, you must have crossed a post against Meera Mithun of Tamil Bigg Boss show. Viewers of the...

Upcoming Tamil film ’90 ml’ starring Oviya directed by Anitha Udeep and produced by Udeep has been censored with an ‘A’ certificate by the...