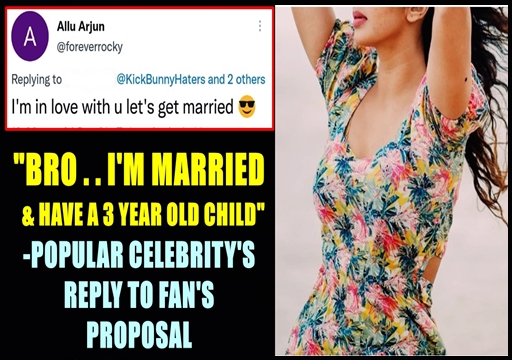 While VJ Anjana was busy brushing off the baseless rumour that caused by Polimer news channel, a fan named Allu Arjun aka “Forever Rocky” proposed her and asked her to get married with him. The 32 year old anchor immediately replied to him disclosing about her marital status which she mentioned in her Twitter bio as well. Reacting to her reply, Allu Arjun said that he thought she was not seeing the comment section and requested her not to mind.

On Friday, Video Jockey Anjana was forced to brush off a baseless rumour that emerged due to a report made by Polimer news. She expressed her frustration over the news channel’s gesture as the news channel said that Allu Arjun mistreated Anjana by not responding to her request and leaving the stage abruptly in anger. Reacting to the video report, Anjana said that Allu politely denied dancing on stage, considering the time protocols and slammed the news channel by asking them to make another news by using her tweet like they want.

Telugu actor Allu Arjun’s “Pushpa” released in theatres across the state on 17th of December and the actor is pretty much busy promoting for the film since it got scheduled for release. Recently, he took part in an event to promote the film among the Tamil audience and uttered a punch dialogue from the movie in Tamil to make the crowd go gaga. When he was about to leave, VJ Anjana could be seen requesting him to shake his leg for a song from his movie.

Allu Arjun, to make her stop asking, caught her hand and shook his head as “No” for a couple of times and left the stage immediately by waving for the fans. Producing the video, Polimer news channel said that Allu Arjun left the stage angrily and the question asked by Anjana made the entire stage uneasy.

Anjana who happened to see the news report, totally denied it and said that Allu Arjun politely denied dancing with a smile due to time protocols. She also asked the news channel to make a news out of her tweet like they want by adding a hashtag “Slow claps”

it was already way over time limit and the event was over. We just requested him to dance and he very politely denied with a smile keeping time protocols in mind. As simple as that. Now.. take this tweet and make it a news and gain some attention, like u want👍 #slowclaps 👏 https://t.co/qI8S2DEp14

She also uploaded a tweet praising Allu Arjun and explaining how ardently she adores him as a star and made sure that there’s nothing sour between herself and the Telugu super star.

A huge fan of Icon Star. Started watching Telugu movies coz of his ‘Arya’.,#After #PushpaTamilGrandSuccessMeet i fell in love with him for the person he is. One of the kindest, sweetest , down to earth stars I have ever met ❤️ @alluarjun #Pushpa #bunny 📸: @camsenthil ❤️ pic.twitter.com/CtntS3de9D

The tweet garnered huge reception from the fans of both Tamil and Telugu cinema. Among the hundreds of reactions, a follower proposed the Television host writing “I’m in love with u let’s get married” in his comment.

I’m in love with u let’s get married 😎

Immediately replying to him, Anjana who got married to “Kayal” fame Chandramouli years ago and has a son with him named “Rudrakhs” who is three and half years old, wrote “Bro. M married and i have a kid who is 3 and a half” by adding a laughing emoji.

Allu Arjun who didn’t expect a reply from Anjana, said that he thought she wouldn’t see the comment section and also mentioned that he didn’t see her bio before to get a reply from the TV host who said “Haha! No prob!”

England batswoman Alexandra Hartley's tweet after seeing the result of third test between England and India didn't go well with the players of the...

With The Emergence Of OTT, Producers Raised 6 Demands To Theatre Owners To Release Films !!