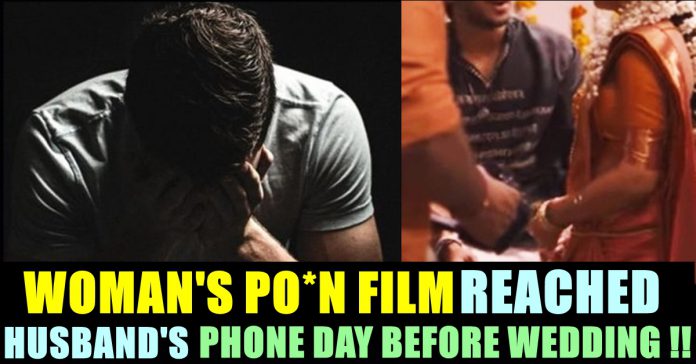 A Bengaluru resident received his future wife’s intimate videos with another man right before his marriage. The man who sent the videos alleged that he got involved in a relationship with her for 7 long years. Now, it became a subject to police complaint and a case for breach of trust was registered against the woman by police officers.

The vast development in the usage of digital media by large number people leads to several issues, though it helps people to interact with the society easily. We have seen social media causing marital disputes but in this recent case, a man got betrayed by a woman whom he trusted the most.

Suresh (name changed), a Bengaluru resident received an obscene video clip of his wife being intimate with another man. The incident happened two days before their wedding night. The man who approached police to take action against his wife, alleged that their marriage took place in Hassan in November last year. The bride’s name is Sadhna (name changed).

The Times of India reports says that Suresh received obscene pictures of his wife on Facebook messenger on December 13 last year. Their wedding night was scheduled on 15th of December which is two days after the bizarre happened. The man who sent the photographs gave Suresh a phone number in Facebook messenger to contact him. The man alleged that he was in a relationship with Suresh’s bride for past seven long years.

According to Suresh, the guy, who identified himself as Rahul, told him that he was in a physical relationship with Sadhna even after their engagement which happened in June 2019. “After this conversation, Rahul showed me a video of my wife having physical relationship with him. He also sent me the Whatsapp screenshots of the chats between him and my wife which happened between December 10 and 12. In one of the messages she says that she likes Rahul and in another message she says that she would dump me” Suresh said in his police complaint.

Suresh also reported that he got deeply depressed and his family is in deep shock. Reacting to the complaint of Suresh, Police arrested the man who alleged that he had an affair with the woman. Suresh also claimed that the parents of Sadhna are aware of their daughter’s illegal relationship. Further he informed police that the woman’s uncle is threatening him against approaching police.

Meanwhile,the woman left behind a note, blaming Suresh and his family for instigating her for suicide, according to Suresh. Police filed a case for breach of trust based on the complaint filed by Suresh.

#BJPInsultsThiruvalluvar Trending On Internet !! Here’s Why !!

Aspiring heroines are making good use of this lockdown opportunity to build their portfolio by conducting photoshoots. Even top-tier actors such as Samantha, Vijay...