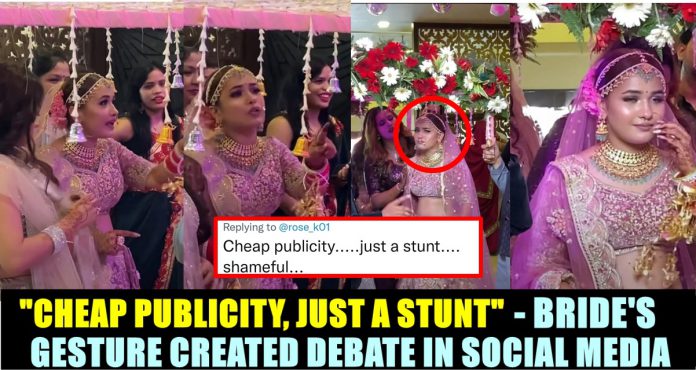 Following the incident of the bride refuses to enter the wedding venue because of the song she had selected wasn’t the one being played, Rosy a lawyer in profession posted a tweet and conducted a poll on her Twitter page.

But one couldn’t seek perfection in everything. Things may happen unplanned or sometimes plans may collapse. Shivani Pippel refused to enter the wedding venue when the song she had selected to make her grand entry was not played. This made the bride upset. Shivani said, “I had said I want ‘Piya mohe ghar aaye’, ask him to play it,” is heard in the video. The video also shows that the family members assures her that the song she had asked for will be changed.

This video was posted on her Instagram page with the caption, ‘Why I didn’t want to enter?’ Later the video was reposted by the ‘The Wedding Brigade’ along with a caption that read, “Watch the video to know why the bride didn’t want to enter the venue 🤭 Brides to be don’t forget to get your bridal entry song ready to avoid last-minute mishaps ”

This repost video is going viral on Instagram as well as on other media platforms. Some netizens commented Shivani’s demand is fair because the wedding is a big day for any bride and every bride wants it perfect. But some others say it is not an act of maturity and she is demanding like a child to change the welcoming song.

After a few days, on Instagram Shivani had posted a video of grand entering the wedding with the song she had asked for captioning, ‘Moment later song was played’. This made her ‘the trending bride’ which keeps her followers count on Instagram increasing with each passing day.

On 24th August 2021 Lawyer Rosy had tweeted, “Bride throws a mini tantrum & Refuses to enter wedding venue when a song she wanted for her entry is not played” and posted a poll of Team bride, Team Grownup and Team Hubby. As of now, Team Hubby is on leading. This tweet further made into a debate.

Bride throws a mini tantrum & Refuses to enter wedding venue when song she wanted for her entry is not played 🤦‍♀️ pic.twitter.com/NmWZl3ZdwT

Following below are the comments who support this incident of Shivani.

god forbid a woman wants something to go perfectly on an important day in her life and gets upset when it doesn’t. Men throw tantrums, slam doors and punch walls at the smallest things but women are sooo fussy and unreasonable for wanting something to go right on a special day

What’s w the need to capture moments of stress/anger by women and put it online for ppl to laugh at? Esp when the “jokes” are invariably sexist wife jokes about how dramatic/difficult women are?

Weddings are v high stress where brides face the pressure to be perfect! Let her BE.

Aww it’s her big day. Probably rehearsed very long for it too. Even losing a hairclip/footwear/item of clothing on the wedding becomes a stressful thing. It’s the combo of nerves, fear, excitement & some brides get overwhelmed. Bridezilla word was not made-up without reason. 😁

Her wish must have been granted without making her sad. 😑

Following below are the comments against Shivani’s wedding drama.

Unpopular opinion : I honestly feel such people have made a mockery of this entire event of getting married 😑

The guy she is marrying has my full sympathies. One should learn to cope up with failures and road blocks in life. This is just a trailer God forbid no one knows what life is going to throw at him or her.

I’m torn between the two choices. It’s her big day, they paid the DJ and they would have rehearsed this,she looks so sad. At the same time, how embarrassing to make such a scene. Omg

One could not predict what is trending on the internet. The netizens play a huge role unconsciously in making silly things trend.