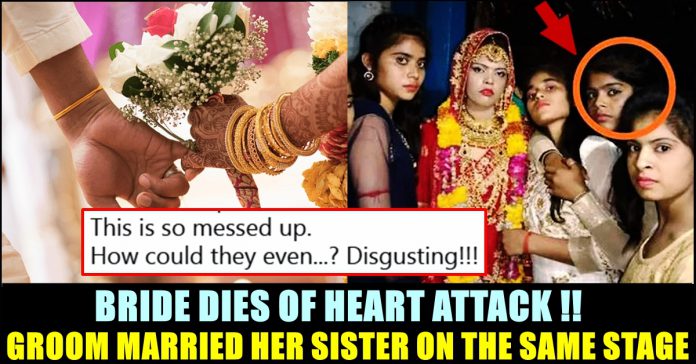 There is no denial in a Marriage ceremony being one of the most important ritual events in country India but conducting it as per plan even after the demise of the bride is something that requires the intervention of cops. Though it is unclear whether there is law to punish people who are involved in conducting such a marriage, the digital media of current era won’t spare them as they have already started condemning the bride, groom and mainly their parents.

It has been reported that the groom decided to marry the sister of his bride after she collapsed and died of heart attack during the wedding ceremony. The bizarre event took place in Uttar Pradesh and the bride and groom were identified as Nisha and Mangesh Kumar respectively. The ceremony took place on the 27th of May, according to reports.

The marriage ceremony was initially planned to take place by having Mangesh Kumar and Surabhi, elder sister of Nisha. During a ritual called Jaimala which demands the bride and groom to exchange garlands, Surabhi was collapsed and a doctor was immediately called to treat her. It has been reported that Surabhi suffered a heart attack and the doctor pronounced that Surabhi is dead.

All of a sudden, members of both the families and the groom decided to wed Nisha, younger sister of the deceased. The family, reportedly continued to complete the marriage ceremony by having Surabhi’s body laid in the next room. Saurabh, brother of both the women said “It was bizarre situation as the wedding of my younger sister was being solemnized while the body of the another sister was lying in another room”, according to the Times of India.

“We have never witnessed such mixed emotions. The grief over her death and the happiness of the wedding has yet to sink in” said Surabhi’s uncle Ajab Singh, according to reports. As soon as the news broke out in media, users of Internet started slamming both the families for involving in such an inhumane act. “I am more appalled at the fact that the dead woman’s family prioritizes a wedding above her life or death.” said one Pooja whereas a Natalie asked “Okay, who poisoned the bride…the sister or the groom”

Check out some of the social media reactions below :

Yes ..but poverty ,limited means brings with itself diffrent kind of moral challenges one can't fathom ..they would have spent their lifes earning for this marriage …may.be paid hefty dowry in advance as It happens usually ..

Most of the parents are like, how will we face the society? And some random relative suggests a horrible idea, and then they give in.
Bcoz of societal pressure, girl's parents are always on defensive.

Poverty is the culprit here.

https://t.co/EeW8GdEWrf i thought the same thing

The parents obviously forced it

So the guy wanted to spend his life "happily ever after" with the woman who died and after her death suddenly decides to spend his life with another woman?? HOW? This is so messed up.
How could they even…? Disgusting!!! https://t.co/eBOyOtT4ns

Previous articleUser Received Reply In Hindi After Complaining About Hindi Imposition In EPFO Website !!
Next article“Nayanthara Got Those Roles After I Rejected Them” – Actress Opened For The First Time

Bigg Boss show is keeping netizens busy in daily basis with three promos and a show streaming time for 1 hour per day. Many...