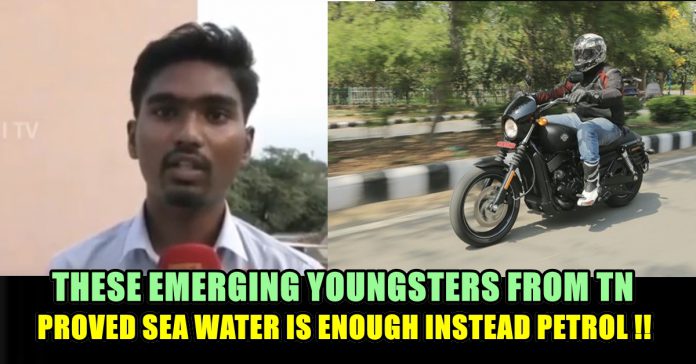 To the reflection of this two emerging youngsters from Erode, Tamilnadu has came up with an amazing solution which is way progressive than sticking with this weak system of our country. Jothi Basu and his friend belongs to Surambatti which belongs to Erode. By using the Hydrogen gas as fuel which is derived from separating the Chemical substance of the Sea water they did this rare discovery of using Sea water instead petrol and diesel.

“The world is made of water , most of our liquid requirements are satisfied by sea water only which we have used in this experiment as well. From using this method there will by no harm for the environment as the amount of carbon is less in Hydrogen gas. While using this as fuel the amount of carbon-di-oxide acquitting will also be less. So this has a capability of replacing petrol and diesel. Beside , the level of crude oil is decreasing day by day in Gulf countries such as Saudi Arabia. At some point in future , the alternatives for petrol and diesel will be required as the existence of crude oil will reach level zero. What we have done is the initial state of inventing those alternative solutions”  said Jothi Basu.

What do you think of this innovative invention from Tamilnadu Youngsters ?

Previous articleAccused S.VE. Sekar Roaming With The Support Of Armed Police Officers !! : WTF !!
Next articleVignesh Shivan Posed For A Magazine Cover & Requested Trollers Not To Troll !! : Check What They Did !!

Chinmayi Responds To An Abuser Who Termed Her Press Meet Video As “Hot Show” !!

Raghavendran Puli of "Kanaa Kaanum Kaalangal" fame, recently announced that he is opting himself out from a Vijay Tv serial named "Kaatrukenna Veli" in...