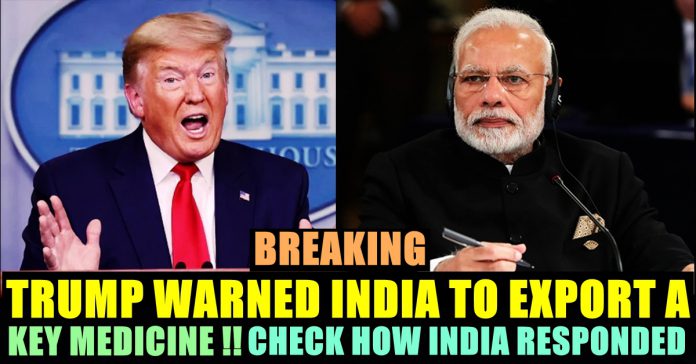 US president Donald Trump indicated that there may be a “retaliation” if India rejects to export hydroxychloroquine, a key anti malaria drug believed by many to be effective in the treatment of coronavirus. These statements surfaced from Donald Trump, two weeks after the Indian government banned export of the drug as experts tests its efficacy in helping treat Coronavirus patients.

When one of a reporter asked about “retaliation to the US ban on export of medical goods” from India, Donald Trump said “I would be surprised If he (PM Narendra Modi), would, you know, because India does very well with the United states.” in the White house press meet on Monday.

“I don’t like that decision. I didn’t hear that that was his decision. I know that he stopped it for other countries. I spoke to him yesterday, we had a very good talk and we will see whether or not that’s his, For many years they have been taken advantage of United States on trade. So I would be surprised if he decides not to export. He would have to tell me that. I spoke to him Sunday Morning, called him, and I said we would appreciate you allowing our supply to come out. If he doesn’t allow it to come out. That would be OK. But of course, there maybe retaliation. Why wouldn’t there be”, the US president said.

Watch the video of Trump’s speech below :

Trump mentioned hydroxychloroquine as “game changer” though it is yet to be confirmed as an effective medicine to cure the deadly medicine. In a notification on March 25, India announced a hold on the medicine’s export, adding that it be allowing only “case to case” basis on humanitarian grounds.

Now, a recent report had said that Indian government has decided to lift a partial ban on hydroxychloroquine. According to sources, the centre will not ban but restrict the export of hydroxychloroquine and paracetamol depending on the availability of stock after meeting domestic requirements. The Ministry of External Affairs and pharma industry will decide on such allocations depending on the humanitarian crisis.

United States faced the highest number of Coronavirus cases in the world as of now. With more than 3,67,000 positive cases and more than 10,800 deaths, US happens to be the most suffered country due to the virus. Meanwhile India has reported 4,700 positive cases with 137 deaths as of 6th April.