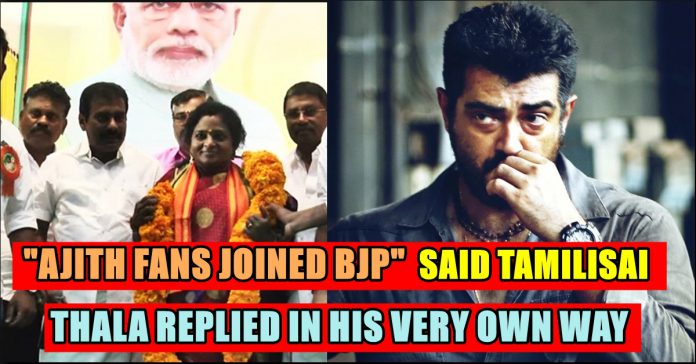 BREAKING :Tamilisai Said That Ajith Fans Joined BJP !! Here’s What Thala Himself Has To say !!

Tamilisai Soundararajan is a doctor and President of the Tamilnadu Bharatha Janata Party. She was a National Secretary of the Bharatiya Janata Party prior to this appointment. She is the daughter of Kumari Anandan senior congress party leader in Tamil Nadu. Recently she participated in an event held at Tirupur where she said that many hardcore fans of actor Ajith Kumar ahs joined BJP. She also said with the contribution of Ajith fans Lotsu will bloom in Tamilnadu. She confidently expressed  that Ajith fans will take the welfare plans and  policies of Indian Prime Minister Narendra Modi to the people.

“Ajith is the most honest person in film industry, and just like he does good to people, his fans will also serve the society, and henceforth, his fans must carry forward the welfare schemes and development plans of Modi to people.” Tamilsai praised Ajith fans in the event. Now the manager of actor Ajith Kumar Suresh Chandra has posted a press release in his twitter account captioning it as “Press release from the desk of Mr.Ajith Kumar.” The tweet attached with an image of Ajith Kumar’s statement about his fans joining a political party. 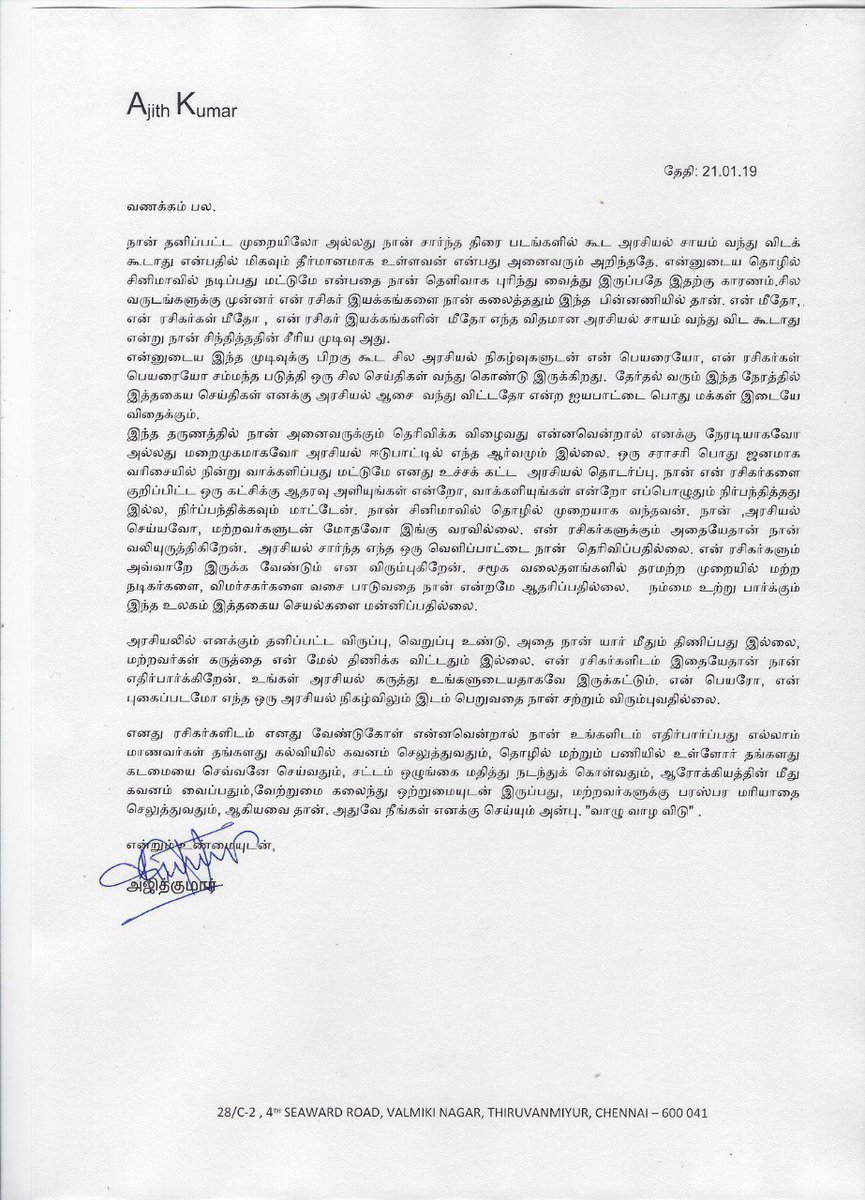 Eventhough after my decision there are some rumours spreading about me and my fans. At this time of Election it will instigate a doubt among public as I desire to be a politician.

Through this statement I intend to announce that I have no political belongings in any way. Voting is the maximum connection between me and politics. I never forced my fans to support for any political party and I won’t in future. I see cinema as an occupation and I did not come to fight against anyone. I insist the same to my fans. I never expose my personal interest in politics and I want my fans to be in the same way. I never supported to social media trolls and abuses in any way and the world would never forgive us for such act.

All I expect from my fans is nothing but do their duty and take care of their health. My sincere request to my fans is for students to concentrate on their studies, for working people to fulfil their responsibilities, to respect law and order, to focus on health, to live in harmony and to show respect to humankind unconditionally. This would be the biggest respect and appreciation my fans can show me. Live and let live.”

On the work front, Ajith has teamed up with director H Vinoth of Theeran Adhigaaram Ondru fame for his next flick. This untitled film is the Tamil remake of Hindi blockbuster film Pink, produced by late Sridevi’s husband Boney Kapoor.

What do you think on this press statement ?? Comment your views below !!

Previous articleCheck Who Joined The 10 Years Challenge Here !! You Will Go WOW For Sure !!
Next articleSTR’s Mass Transformation : Requesting His Fans To Celebrate Like Never Before !!