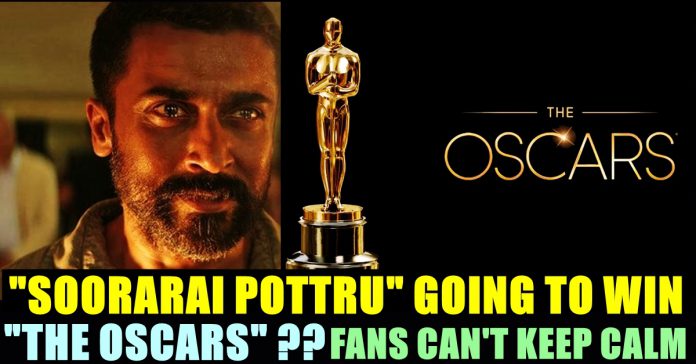 Actor Suryia’s “Soorarai Pottru” officially joined the race of Oscars and the Tamil based social media couldn’t keep calm as soon as the news surfaced on the Internet. It is reported that Oscars has changed its protocols this year due to the COVID 19 outbreak and allowed movies that were released in OTT to enter the Oscar race. Reports suggests that the Sudha Kongara directorial will be competing in the general category of Oscars.

Suriya’s “Soorarai Pottru” released in Amazon Prime only to make the fans of Tamil cinema go gaga over it. It became the first Tamil film to have a background of flight, airport and airlines as its core plot. On seeing a top-tier actor’s film getting released after a very long time due to COVID 19 outbreak, fans of Internet became extremely happy and watched the film overnight.

Now, it has been reported that the film has officially joined the race of “Oscars”. Rajasekar Sundarapandiyan who co-produced the movie said “Our team is confident that the film will impress upon Oscar Jury members as how it has impressed millions of film lovers across the globe” while talking to the media.

“SooraraiPottru joins OSCARS under General Category in Best Actor, Best Actress, Best Director, Best Original Score & other categories! The film has been made available in the Academy Screening Room today” he wrote in his tweet and added the pictures of the details.

Music director G.V Prakash kumar also shared the news in his twitter account saying that he feels super happy as the film entered the race also for original background score.

Fans got extremely delighted and sharing the news proudly from their respective social media accounts. They started trending the hashtag “Soorarai Pottru” in twitter with tweets appreciating Suriya, Sudha Kongara and the crew members of the film for making Kollywood proud.

Previous articleFans Got Excited On Seeing This Video Of Original BIGG BOSS !!
Next article“It Is Heart Breaking” – Fans After Knowing About This Decision Of “Master” Crew !!