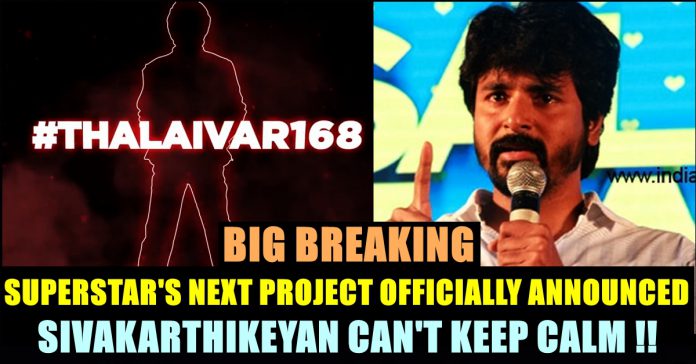 Superstar who was last seen in Karthick Subbaraj’s “Petta”, is next to be seen in A.R Murugadoss’s “Darbar”. The film which is in its final stage of shooting, has Lady Superstar Nayanthara in the female lead. While every fan of the actor is expecting him to open about the next, announcement, Sun Pictures came up with a massive announcement about the next project of Superstar Rajinikanth.

The film which is tentatively titled as “Thalaivar 168” is going to be directed by “Viswasam” fame Siva. It was earlier rumoured that the director met the actor a couple of times in his resident. Siruthai Siva was also invited to Rajinikanth’s house to attend Golu during Navarathri. Sun Pictures, the production house, took to Twitter to share a video announcing their new venture.

“After the blockbuster hits Enthiran and Petta, the mega hit combo of Superstar @rajinikanth and @sunpictures come together for the third time for Thalaivar 168, Superstar’s next movie, directed by @directorsiva” wrote Sun Pictures in its tweet.

After the blockbuster hits Enthiran and Petta, the mega hit combo of Superstar @rajinikanth and @sunpictures come together for the third time for Thalaivar 168, Superstar’s next movie, directed by @directorsiva#Thalaivar168BySunPictures pic.twitter.com/AL5Z6ryjbG

As soon as this announcement made, Fans couldn’t keep calm including actor Sivakarthikeyan who expressed his joy through a tweet saying “Thalaivar super star @rajinikanth sir and @directorsiva sir wit
@sunpictures 🔥🔥🔥Going to be a cracker.. Pakka sirappaana tharamaana sambavam👍💪”

If reports are to be believed, Superstar Rajinikanth will see two releases in next year as “Darbar” is planned to release on Pongal and Thalaivar 168 to hit the screens on Diwali day.

What do you think on this collaboration ?? Comment your views !!