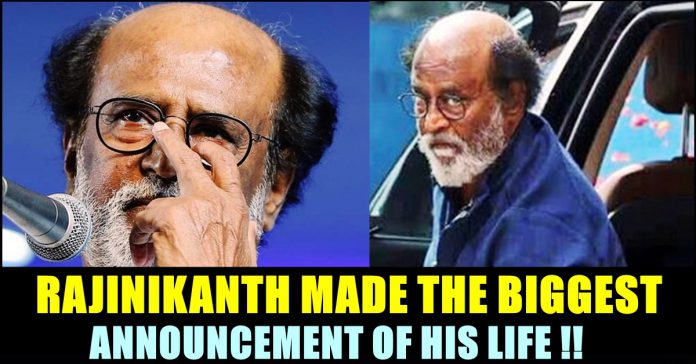 BREAKING : Superstar Rajinikanth Made The Biggest Announcement On His Political Stint !!

Superstar Rajinikanth who said that he will announce about the launch of his party soon, has made it public that his party will be launched on January month and the date will be announced on 31st of December. “Let’s Change Everything, If not now, then it will never happen” are the hashtags he used to make the biggest announcement about his political stint.

The Superstar actor had said that he will win the upcoming election with the immense support of the public and would maintain a politics that is honest, transparent, corruption less and secular. “Miracle and wonder will must happen” he said.

Earlier, Superstar Rajinikanth who is expected to enter the Politics in near future, released a press note saying that the informations carried by a fake report that are doing rounds are true. The fake report Rajinikanth mentioned said that COVID 19 virus had hit his plans to contest in the upcoming politics. The letter reportedly indicated that the actor had been advised by doctors to restrict his movement since he has a kidney condition that is vulnerable to COVID 19 virus.

“I do not fear about my life. I am more concerned about people’s welfare. To usher in the political change I promised, I have to plunge actively into the political field. Midway through if my health gets worse, it could cause fresh challenges to the political process itself” Rajinikanth said according to the leaked letter.

During March, Rajinikanth said that he will select an appropriate candidate to be as Chief minister and will lead his party as party leader alone. Rajinikanth displayed his political entry speech to reiterate his statement on not being a CM-aspirer. “It was not in my blood. I can’t think of being a Chief minister at all. You all know the incident that happened in 1996 where many influential people asked me to contest as CM. That is not in my mind at all. I will remain as party leader” he said.

Previous articleVJ Parvathy Replied To Those Who Body Shamed Her !!
Next articleBalaji Took Sly Dig At Mugen Rao ?? WATCH

We all would have watched that one scene in a movie or in a Television serial where the bride would marry a complete stranger...