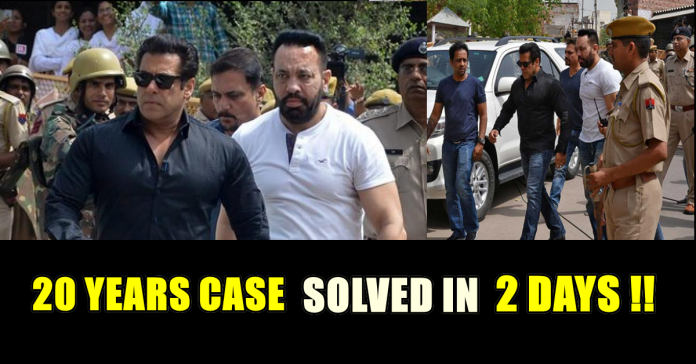 BREAKING : Salman khan got bail and became free though eyewitness was there.. WTF!

Dhiwaharan
April 7, 2018
Share
Facebook
Twitter
Pinterest
WhatsApp
Actor Salman Khan was on Saturday granted bail by a district and sessions court in Jodhpur in the 1998 blackbuck poaching case in which he has been sentenced to five years in jail.
There was a twist in the case when suddenly 87 judges in Rajasthan got transferred including the one who was hearing Salman’s bail plea. Earlier there was confusion whether the hearing will take place today or not but the judge decided to hear the case. District and Sessions Judge Ravindra Kumar Joshi heard the arguments of prosecution and defence which lasted for about an hour and pronounced the order at around 3 pm, a defence counsel said.
[wp_ad_camp_1]
Khan’s sisters — Alvira and Arpita — were present during the hearing. The actor had spent two nights in the Jodhpur Central Jail after his sentencing on Thursday.
The actor was convicted by a trial court and sentenced to five years in prison for killing two blackbucks during the shooting of “Hum Saath Saath Hain” in Jodhpur. Actor Salman Khan is likely to leave jail by 4.15 pm, reports News18. The report also expands on the details of Salman’s bail plea. The actor was released on a personal bond of Rs 50,000.  The suspension of his sentence has been allowed, pending a decision on the appeal filed by Salman’s legal team.

In his 201 Page verdict, Chief Judicial Magistrate Dev Kumar Khatri said that since the culprit is an actor and has a substantial following, thus his actions are observed and followed by the masses.

“The accused is a popular actor whose deeds are followed by people. Despite this, the accused hunted two black bucks. It is not justified to give Salman Khan the benefit of probation in view of the manner in which he hunted by shooting two innocent, moot black bucks that come under the purview of the Wildlife Conservation Act,” the verdict had said.

Speaking to reporters outside the Jodhpur Sessions Court, Salman Khan’s chief counsel Mahesh Bora said that they argued the actor has cooperated with authorities throughout. “He has been facing these charges for the last 20 years. He has not misbehaved and has cooperated with the investigation,” Bora said.

The prosecution on Saturday argued that Salman Khan’s bail plea application should be rejected on the basis of eyewitness accounts, which they said proves the actor’s guilt in killing two blackbucks in October 1998. The defense counsel, on the hand, argued that the eyewitness accounts are not true and filled with several discrepancies.

Previous articleTN Farmers Protested By Burying Themselves in Sand : Know What Chief Justice Of India Said ??
Next articlePolice Arrested A Gang Of 9 For Smuggling : The Amount Of Marijuana They Handled Is Unbelievable !!

Mohammad Amir, former Pakistan player who got banned by International cricket council for involving in spot fixing, uploaded a tweet in his official twitter...