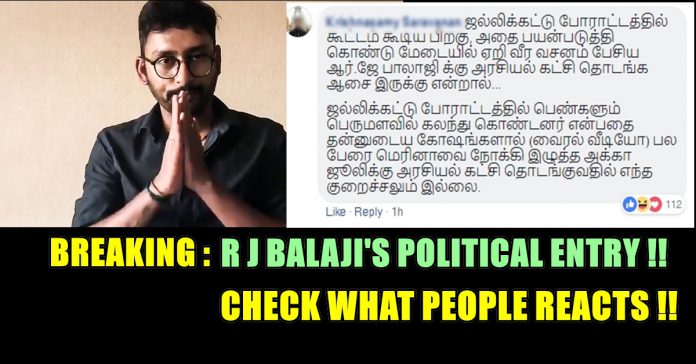 In an interview to Tamil news channel News 7, Balaji, who called himself an ardent fan of the actor, said that the time for Rajinikanth to enter politics is long gone. Now he is seen in the Tamil commentary box of IPL 2018 which has been telecasting in Star Sports network. He has been occasionally sharing the information about social causes on his twitter page as well. In this case, wall paintings are seen in some places which denotes that RJ Balaji to announce his political party announcement on May 18. It is noteworthy that Mullivaikal Memorial Day was celebrated on that day.

The advertisement says “To lead the youth, To bring a change in Tamilnadu we are welcoming R.J Balaji”. A picture of a bull is seen in the flag which is drawn in the wall as well. Comments by his followers are both positive and negative but here we provide you the best of them :

Previous article21 Y/O Woman Soldier Lost Her Ear In An Accident : Check Out How US Army Doctors Fixed It !! : Unbelievable !!
Next articleSHOCKING : Actress Sridevi Murdered For 240 Crores ?? WTF !!

Former Bigg Boss contestant Bharani has opened about the ongoing Saravanan controversy for the first time. In the interview, Bharani opened about many issues...

The Kollywood actor Siddharth tweeted a question about giving R Ashwin the captainship to bring the game out of him.  Indian Nation Cricket team is...