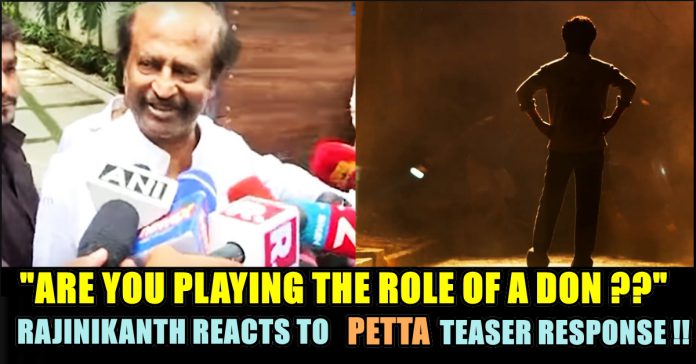 Makers of Rajinikanth-starrer, upcoming Tamil feature Petta, released a teaser of the film to commemorate the superstar’s 68th birthday. Being one of the most anticipated films, Petta will be helmed by Karthik Subbaraj and features actors such as Vijay Sethupathi, Nawazuddin Siddiqui, Simran, Trisha, Malavika Mohanan, Megha Akash and Bobby Simha among others.

In a way, the teaser pays tribute to the never-dying charisma and boisterous energy that even Rajinikanth’s shadow can bring to the screen. The teaser engages us with its background score and visuals of the Superstar’s slow-motion walk which hint at Petta being an out-and-out Rajinikanth film. Judging from the teaser, the film is not going to discuss politics (Kaala) or toy with big concepts (2.0). It intends to only celebrate a movie-god, who has reigned over the box office since the 80s.

Director Karthik Subbaraj, by his own admission, a die-hard fan of Rajinikanth, brings back the iconic opening credit that has accompanied most of Rajinikanth’s films since the early 90s. He has even got Anirudh Ravichander to give a peppy twist to musician Deva’s evergreen Rajinikanth theme score. The theme song slowly builds up and makes way for Anirudh’s ‘Marana Mass’ song. And at the end of teaser, we also get to see Rajinikanth wearing the sunglasses in his trademark style.

Now a video of the actor turned politician interacting with the reporters has been surfaced on the Internet. Various questions including the resignation of RBI governor shot by the reporters to which he answered.

When one of the reporter asked about the Petta teaser response, the actor replied “it received very well, I am very happy about it.” Another reporter asked if he plays the role of a don in the movie to which Rajinikanth replied “I can’t reveal it right now” with a chuckle.

“Sre you ready for the next film ??” asked another reporter. “Let Petta come first” said the Superstar. “I could not comment about it without knowing for which reason RBI governor resigned” answered Rajinikanth to the reporter who asked about it.

Petta boasts of a star-studded cast. However, we don’t get to see any of them in the teaser as it is entirely dedicated to Rajinikanth. The film also stars Vijay Sethupathi, Nawazuddin Siddiqui, Simran, Trisha, Malavika Mohanan, Megha Akash and Bobby Simha among others.

Previous articleThis Leading Television Channel Bought The Television Rights Of “Pariyerum Perumal” !! Check Audience Reaction !!
Next articleMan Offered This Malayalam Actress 2 Lakhs For A Night !! Check Out How She Reacted !!

Thalapathy Vijay who is recently making headlines for various reasons is currently busy in the shooting spot of "Master". The main reason behind Vijay...

“You Made My Life Beautiful Purusha” – Mahalakshmi After Marrying Ravinder Chandrasekhar