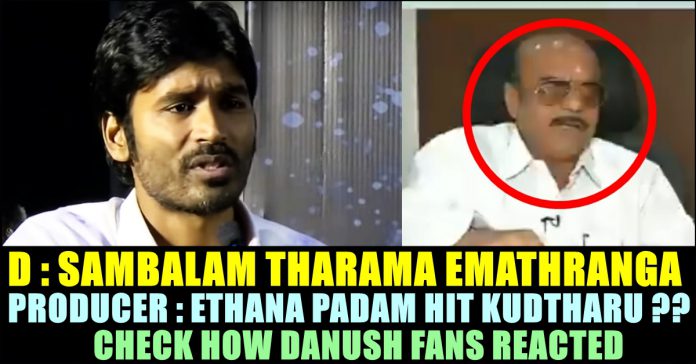 Actor Dhanush’s speech at “Asuran” audio launch has created controversy. Asuran is an upcoming Indian Tamil-language action drama film written and directed by Vetrimaaran. The film stars Dhanush in the dual roles of father and son. The film marks the debut of Manju Warrier in Tamil cinema. It was produced by Kalaipuli S. Thanu under his production banner V Creations. G. V. Prakash Kumar scored the music for the film, rejoining back his association with director Vetrimaaran. The film is based on the novel Vekkai by Poomani.

The audio launch of the movie took place recently and the movie crew which includes Vettri Maaran and Danush gave their speech for the first time regarding the movie since the announcement. In the audio launch Dhanush kept it simple in a white shirt and matching dhoti paired with brown loafers, the lead lady Manju looked ethereal in a grey and red suit with matching juttis.

Danush who expressed his disappointment on the National award juries for not considering Tamil movies such as Merku Thodarchi Malai, Ratchasan, Pariyerum Perumal also said that he expected an award for Jackson who worked as an art director in Vada chennai movie.

While praising “Asuran” movie’s producer S. Dhanu, Danush said that he is very much grateful for him as he gave his complete salary before the movie starts. “In this period, it is not that simple to get the salary amount from the producers. Producers may have complaints against us. I am talking about my personal experience. Lot of them have cheated me and are cheating me. But Daanu sir gave me my salary before starting the film. That helped me a lot at that time. I am very much grateful for him” said Dhanush in the launch.

#WeStandwithDHANUSH
This the original video about insulting dhanush @dhanushkraja
Not fair! pic.twitter.com/hirQ2mSkKM

As soon as this news surfaced, Fans of the actor started trending hashtags by supporting Dhanush. #WeStandWithDhanush the hashtag said under which they are exhibiting their support. Check out some of the comments here :

If world is against you then I'm Against the world!!!#WeStandwithDHANUSH ✋ pic.twitter.com/bsHxdYYZVP

Previous articleBIGG BOSS Reshma Asked Followers To “Pray” For Kavin !! Check Out The Reactions Of Her Followers!!
Next articlePrithi Ashwin Teased Ashwin By Posting Picture With Trisha !! Even Trisha Couldn’t Keep Calm !!

Former Bigg Boss contestant Meera Mitun has been making baseless allegations against actors Vijay and Suriya for past few weeks. She said that they...