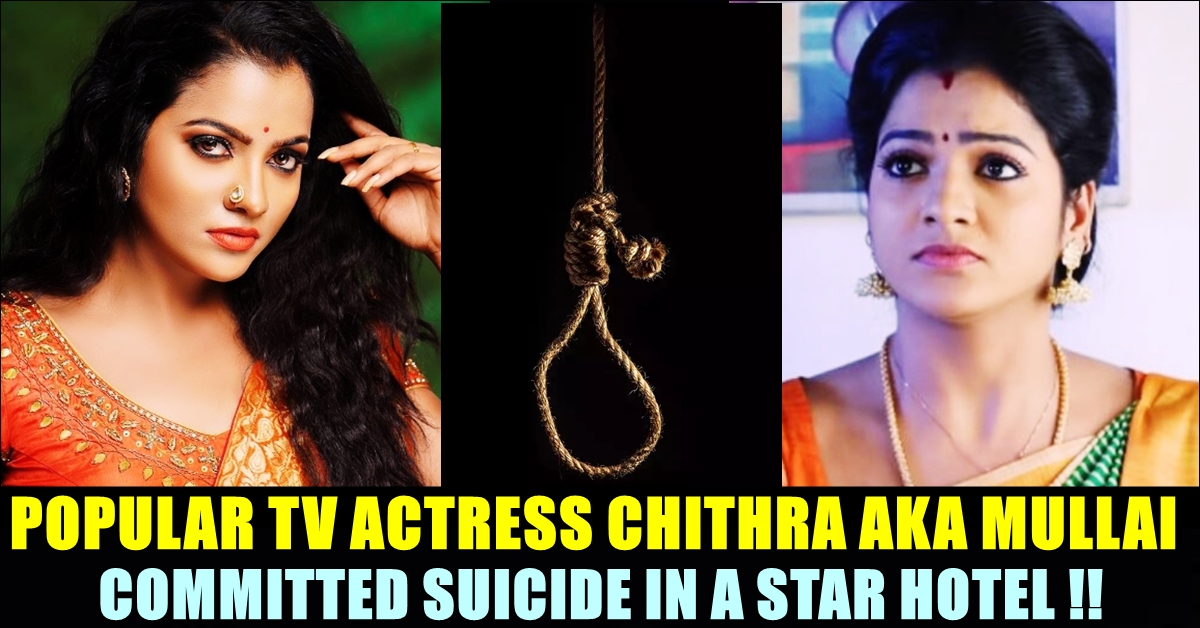 Television actress Chithra, popularly known as VJ chithu or “Mullai”, committed suicide in a star hotel by hanging herself, according to reports. It is believed that she killed herself in a star hotel that is located in Nasarathpettai near Poonamallee. She was recently engaged with a man named as “Hemnath” and the pictures of her engagement were released by herself in her official Instagram account.

The 28 year old beautiful actress who has been impressing TV audience with her performance as “Mullai”, was pretty active in social media platforms till yesterday. According to Thanthi tv , Chithu was staying in a star hotel that is located in Nasarathpettai to take part in the shooting of “Pandiyan stores” which is being held in the EVP film city, Poonamallee. As Chithu’s house is located in Thiruvanmayur, she found it difficult to travel in daily basis due to the constant rain in Chennai. She decided to stay in a hotel that is located near the shooting spot and was staying in the star hotel with her fiance.

Police officers of Nasrathpettai were informed immediately and arrived at the spot. Chithra was admitted in a nearby government hospital where she was declared dead by the doctors. Now, her body was sent to Kilpauk government hospital for post mortem. The report of Thanthi suggests that Chithra and Hemnath were involved in an argument last night.

In the preliminary investigation, it has been reported that the cause of Chithra’s death was suicide as the bathroom door was locked from inside and was broke by the workers of the hotel. However, the results of post mortem is awaited.

Chithra’s engagement took place two months back and she was expected to get married in a few months. The Police investigations regarding her death is currently underway. The authorities of the hotel, Chithu’s fiance Hemnath are being investigated and the CCTV cameras are being checked.

Chithu was busy acting in “Pandiyan stores” as “Mullai”. She enjoyed a separate fan base for her looks and natural acting. In the serial, she acted as the wife of “Kathir” played by Kumaran Thangarajan. She was pretty much interactive with her fans in Instagram and was enjoying 15 lakh followers. She also participated in the game shows that were conducted by Vijay Television. The news on the death of the 28 year old shook the internet and TV industry.