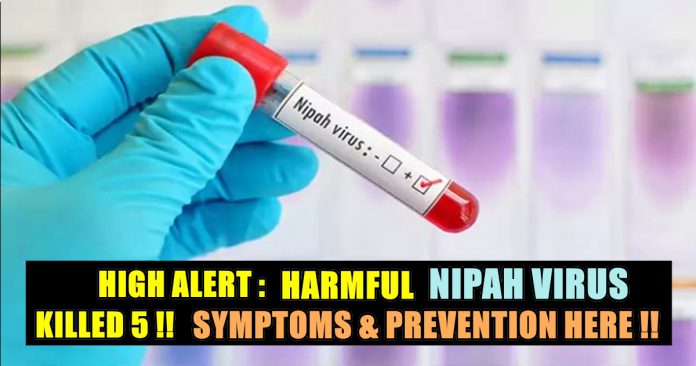 The Health Department of Kerala confirmed that three people had died in Kozhikode district of Kerala after having been infected by a rare virus called Nipah.

On Sunday evening Kerala Health Services Director Dr R L Saritha said, “Today, we got the confirmation report from National Institute of Virology, Pune. We had sent four samples to the institute and three of them tested positive for Nipah virus.” In the last two weeks, there were three deaths in one family at Changaroth panchayat in Kozhikode district in Kerala. Siblings Mohammed Sadik (26) and Mohammed Salih (28), sons of Valachuketti Moosa, died on May 5 and May 18 respectively. Moosa’s brother Moideen’s wife Mariam (50) passed away on May 19. Moosa (62) is now in a critical condition while Atifa (19), Salih’s fiancée, is undergoing treatment at a private hospital.

Samples from the deceased were collected and sent to virology lab at the Kasturba Medical College, Manipal and National Virology Institute in Pune. The results have now confirmed the presence of Nipah virus in the samples. On Sunday, two more deaths have occurred in Kozhikode due to suspected viral infection. According to reports, District Medical Officer V Jayasree gave the names of those who died on Sunday as Ismail of Koottalida and Velayudhan of Kolathur. However, it was yet to be confirmed that they were inflicted with the virus, she said.

Rajeev Sadanandan IAS, Additional Chief Secretary, told TNM, “Currently we are looking at possible sources of infection, that is the primary host which is the fruit bat and the secondary host which is domestic animals. For human to human transmission, we are looking at contacts of the people who have been infected and trying to screen all of them and put them under observation. Possibility of person to person transmission is very high. We have also created isolation wards.” “Reviewed the situation of deaths related to Nipah virus in Kerala with Secretary Health. I have directed Director NCDC to visit the district and initiate required steps as warranted by the protocol for the disease in consultation with state government,” J P Nadda said in a tweet.

Nipah virus transmits from animals to humans and fruit bats of the Pteropodidae family are the natural hosts of the virus.

What are the signs and symptoms of Nipah virus?

Basically, NiV infection in humans is linked to encephalitis – inflammation of the brain- characterized by fever, headache, drowsiness, disorientation, mental confusion, coma, and potentially death. According to the CDC, symptoms can progress to coma within 24-48 hours. In some cases, patients may develop a respiratory illness during the early part of their infections.

How is Nipah virus treated? Is there a cure for NiV?

In humans, the primary treatment for Nipah virus is intensive supportive care. The drug ribavirin has been shown to be effective against the viruses in vitro. However, the clinical efficacy of ribavirin remains inconclusive to date in human trials.

Unfortunately, there is no specific NiV treatment or a vaccine for either humans or animals.

How can you prevent getting Nipah virus infection?

Since human-to-human transmission of Nipah virus has been documented, standard infection control practices are important in preventing the spread of the disease. Health workers should take proper precautionary measures when caring for infected patients or handling and submitting laboratory samples to avoid hospital-acquired infections. Avoiding exposure to sick pigs and bats in endemic areas, not drinking raw date palm sap, and not consume fruits that have fallen on to the ground can help prevent Nipah virus infection.

Previous articleKumaraswamy Wants Rajinikanth To Learn Something About Karnataka Before Making Comments !!
Next articleBREAKING : Considering The Fan Base Of MUMBAI INDIANS , BCCI Decided To Qualify Them Into Play Offs !!