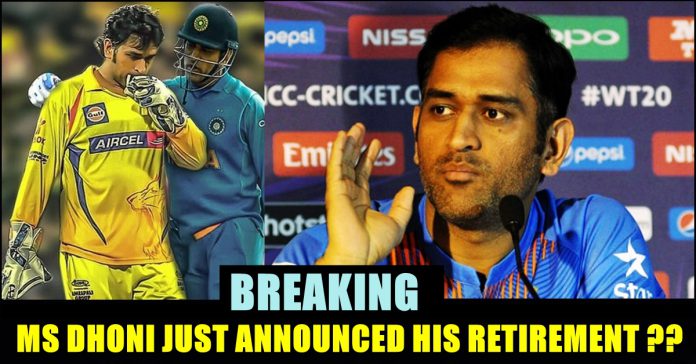 Former Indian Team Captain Mahendra Singh Dhoni. who hasn’t played a single match since the semi finals of World cup tournament uploaded a post in his official Instagram account saying “Thanks. Thanks a lot for ur love and support throughout.from 1929 hrs consider me as Retired”

MS Dhoni earned enormous number of fans as he loves outsmarting the opposition with his quick thinking, innovative field settings and clever bowling changes. Known for his calm and composed nature, MS Dhoni has gained a nickname “Mr.Cool” for keeping himself calm in the field, unlike other captains.

The post he uploaded in Instagram lately consists a 4 minute 7 seconds long video of the journey of the cricketer from the very first match of him till the last match he played.

However, fans are confused on seeing this post from the legendary cricketer. They couldn’t predict whether he mentioned 7 : 30 PM or 1929 hours which is more or less 80 days from now on. In 80 plus days IPL tournament is about to end and we couldn’t say if the cricketer is asking us to consider him as retired till the end of the IPL tournament.

It is notable that the cricketer tested negative for COVID 19 on Friday and started practicing to play for Chennai Super Kings in the IPL tournament. He made his ODI debut in December 2004 against Bangladesh, and played his first Test a year later against Sri Lanka. Dhoni has been the recipient of many awards, including the ICC ODI Player of the Year award in 2008 and 2009 . he made so many achievements in the history of cricket including winning all the ICC trophies as a captain.

Previous articleSumanth Posted Kamala’s Pork Biting Video & Trolled People Who Claimed Her Identity !! Actress Reacts
Next articleRaina Announced His Retirement Too ?? OMG !! This Can’t Be It

Director Bala who is known for providing unconventional films to the fans of Kollywood film industry, legally got separated from his wife Muthu Malar...