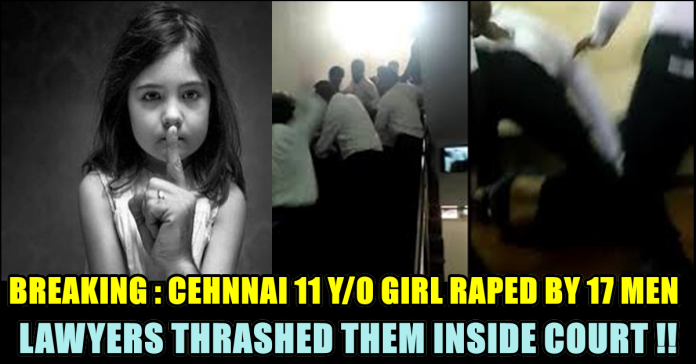 On Tuesday evening, events took a violent turn outside the Mahila Court in the Madras High Court campus. The 17 men accused of sexually assaulting a 11-year-old girl with disabilities in Chennai were being taken to Puzhal prison. This after the court had remanded them to judicial custody till July 31.

However, a number of men who seem to be lawyers took law into their own hands and thrashed the accused in the court premises. Videos of the incident show a man being thrown down the stairs and thrashed by men in white shirts. The video also shows the same person lying on the floor being kicked and punched by scores of men.

The accused were being produced in the Mahila Court in Chennai for allegedly sexually assaulting an 11-year-old girl for several months.

At the time of writing, the accused were still in the court and policemen were being rushed into the court premises for additional security.

The 11-year-old girl was allegedly raped by multiple men in a Chennai apartment over a span of seven months. The survivor was allegedly drugged with injections, forced to consume spiked drinks by the perpetrators, who also allegedly videographed the rape and threatened her not to inform her parents.

The crime came to light when the girl confided in her sister that she had a stomach pain.

17 men were taken into police custody. They worked as security guards, plumbers, and maintenance staff in and around the apartment complex. The men were all reportedly employees of FOCUS and UK Facility Services, a private security firm in the city.

Previous articleGoa No More A “Party” Town ?? Drinking Alcohol In Public To Be Punished In This Way !!
Next articleActor Nakul’s New Look Is An Awestruck !! OMG !! Shocking Transformation !!