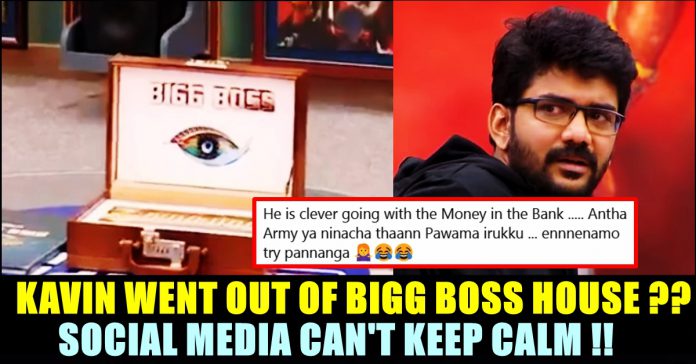 kavin, one of the most talked about contestants of Bigg Boss season 3 is no more a contestants according to sources. Once the actor said that if the door of Bigg Boss house gets opened by Bigg Boss, he would go out without hesitation as he no longer wishes to be a part of this show.

In a way of confirming this news, Vijay Television’s third promo for today also shows the same. Bigg Boss offers the contestants 5 lakh rupees and asks the one who gets it to go out of the house instead of competing in the finale by winning which a contestant could earn 50 lakhs.

Sandy and Losliya trying to stop Kavin from getting out of the house. However, Internet started reacting to this news as soon as the promo surfaced. check out some of their reactions :

However let us wait for tonight’s episode to know about what happened inside the house !!

Previous articleActress Exposed National Award Winning Tamil Director For Misbehaving With Her !! ABSOLUTE SHOCKER !!
Next articleFan Took Dig At CSK Team For Not Picking Players From Tamilnadu !! You Must See CSK’s Reply !!

Even After Nearly 1 Hour Of Advice From Kamal , Video Of Balaji Insulting Kamal Leaked !!

Superstar Kamal Haasan began Saturday’s episode of Bigg Boss Tamil Season two with a statement that sounded like his campaign slogan for the upcoming...

Doctor K Pratheep Kumar, an orthopaedic and arthroscopy surgeon shared the trauma he went through while trying to bury his deceased friend who is...

On 28th of June which marked the 26th day of "Vikram", Lokesh Kanagaraj, as he promised in the post release interviews, has released the...