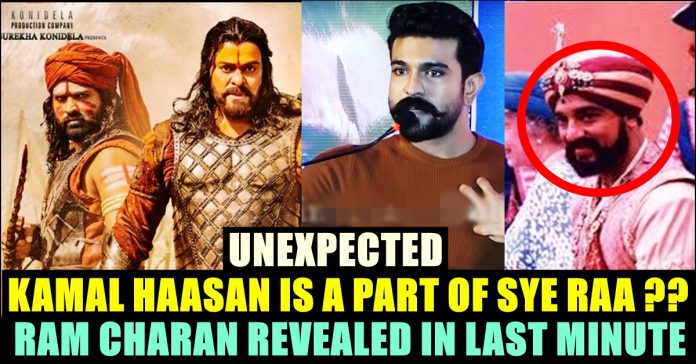 Megastar Chiranjeevi’s upcoming magnum opus Sye Raa Narasimha Reddy, directed by Surender Reddy, is one of the biggest multi-starrers to come out of Indian cinema. From Amitabh Bachchan to Vijay Sethupathi and Kichcha Sudeep, the film features these stars in some really interesting characters.

The Khaidi No 150 actor will be seen playing Kurnool-based freedom fighter Uyyalawada Narasimha Reddy. Not long ago, the 63-year-old star had said it has been his long-time desire to play a historic character. Narasimha Reddy was the fearless inspiration behind one of India’s many rebellions against the British.

Tamil actor Vijay Sethupathi who plays the role of Raja Paandi is doing a character of Chiranjeevi’s confidante in the movie. He plays the ferocious fighter and soul of Sye Raa’s army. Tamannah also doing an interesting role in the movie after making her appearance in Bahubali movie.

Now, to our surprise, Ram Charan, producer of Sye Raa in the audio launch has revealed that legendary actor of Indian cinema industry, Kamal Haasan also joined the crew of the film. Kamal Haasan is now busy in shooting for Shankar’s Indian 2 movie and also planning for his own directorial Thalaivan Irukkindraan.

The actor who leads a political party name as “Makkal Needhi Maiam” became part of this magnum opus by giving an important voice over for 3 long minutes in the movie. Ram Charan who revealed it in the audio launch expressed his gratefulness.

“I thank the most legendary actor Kamal Haasan for giving a 3 minute long voice over in the film. You friendship with dad, Your love for cinema, Your love for India, you did for us. We will never forget this gesture” said Ram Charan in the Press meet.

“It has always been my dream to play Bhagat Singh. Despite being offered the role back then, I couldn’t play it for several reasons and it was later played by several of my counterparts. It was played by several actors across languages. I regret missing out on an opportunity to play the role because I don’t think anyone wants to make a film on him today,” Chiranjeevi said.

Directed by Surender Reddy and produced by Ram Charan on a whopping budget of Rs. 150 crore, the film has music by Amit Trivedi. Originally, A.R Rahman was signed for the project but he opted out citing lack of time due to other commitments.

Sye Raa Narasimha Reddy, which will be distributed by Farhan Akhtar’s Excel Entertainment in Hindi, will release worldwide on October 2.

Kane Williamson, the captain of New zealand team won the hearts of millions for his gesture in the finals of world cup 2019. In...

“I Myself Called BIGG BOSS , They Doesn’t Called Me To Participate” – Rythvika Opens For The First Time !!