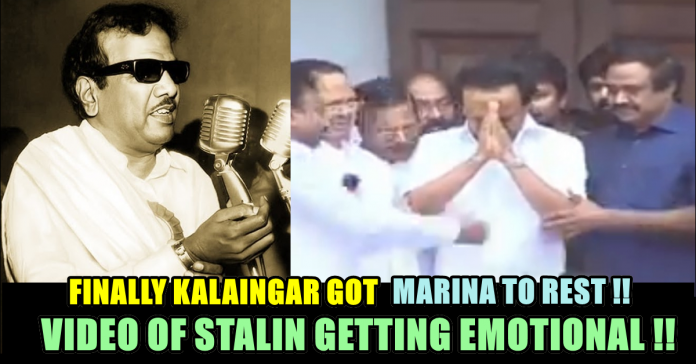 The Madras High Court ordered the Tamil Nadu government to allot space at the Marina beach for Kalaignar Karunanidhi’s burial.

In an emergency hearing on Wednesday regarding the allotment of land for burying the mortal remains of Karunanidhi, a bench consisting of Acting Chief Justice of Madras High Court Huluvadi G Ramesh and Justice SS Sundar ordered in favour of the DMK’s petition requesting the court to overturn Tamil Nadu government’s decision denying burial to the Dravidian stalwart near Anna memorial. As soon as the court made its announcement, Karunanidhi’s family including MK Stalin and Kanimozhi and DMK supporters broke down and cheered at the Rajaji hall where Karunanidhi’s mortal remains are kept.

Following DMK’s request to allot land in Marina to lay Karunanidhi to rest, the Tamil Nadu government, on Tuesday, denied the request and reverted with a press release citing legal complications in allotting land for a memorial in Marina. It also stated that two acres of land has been allotted in Gandhi mandapam, where Kamaraj and Rajaji were laid to rest, to bury the mortal remains of M Karunanidhi.

The TN government through its counsels stated that the government is following the protocol and all the leaders buried in the Marina are former Chief Ministers who passed away while in office. The government also submitted that  the former Chief Minister Janaki Ramachandran was also not allotted land in Marina by the then CM M Karunanidhi, following the state protocol. Senior Counsel CS Vaidyanathan, who was appearing for the state government, said that the State is not in any urgency to get orders passed on Wednesday. CS Vaidyanathan also argued that the DMK is pursuing the case out of political agenda and the withdrawal of petitions in a ‘stage-managed manner’ by others that were pending on the matter was ‘very, very unfortunate’. Stating that inspite of being the tallest leader of the Dravidian Movement, Periyar EV Ramasamy was not buried in Marina, he said that the classification of a sitting CM and a former CM is a valid one. The counsel also said that this decision was taken by the Chief Minister based on precedents set earlier. Referring to Karunanidhi refusing land in Marina for former CM Janaki Ramachandran, CS Vaidyanathan argued that not following the actions taken by the leader would amount to insulting his memory.

The counsel for the government also argued that the protocol with regard to funeral rites of high dignitaries has always treated incumbent office holders and former office holders differently, to which Justice SS Sundar stated that a former CM is not included in Central Government protocol and hence nobody will raise questions if Karunanidhi’s body is buried in Marina. Justice SS Sundar also said that the arguments about the current and former chief ministers were not mentioned in the press release issued by the Tamil Nadu government on Tuesday. CS Vaidyanathan also submitted to the court that a press release cannot be equated with a government order and hence cannot be challenged.

While the state government said that the DMK cannot challenge a press release, the counsel for the DMK, senior advocate P Wilson said that the court must consider the substance over the form of the contention and that the arguments placed by the government counsel are flimsy and not tenable. Article 21 (Protection of life and personal liberty) certainly comes in to play if he is not given a decent burial after he having been CM for 5 times, counsel argued. Praying for a ‘decent’ farewell for the leader, Advocate P Wilson also said that the area around Anna Memorial was announced as a place to do burial in 1988 itself. He said that Chennai Corporation had given approval for burying bodies and constructing mausoleums in Marina. Since all the petitions against constructing a memorial for J Jayalalithaa in Marina has now been withdrawn, there are no more cases pending and no legal complications as specified by the government in its press release, said P Wilson.

“The ideologies of ADMK and DMK are similar and hence MGR was allotted space in Marina,” submitted P Wilson. He also said that if the court does not allow Karunanidhi’s body to be buried at Marina, it will tantamount to discrimination and will hurt the sentiments of the people.

Advocate Veera Kathiravan said that loved one should be buried along with the mentor and only then it can be called a ‘decent burial’. He also said that the TN government, in its counter affidavit has not opposed the fact that Anna memorial is a notified burial ground.

DMK working president MK Stalin along with other senior DMK leaders met TN Chief Minister Edappadi Palaniswami earlier on Tuesday and presented a letter requesting him to allot land in Marina to lay Karunanidhi to rest. In his letter, MK Stalin had mentioned that as a recognition of Karunanidhi’s service to Tamil and the Tamil people, it was only fitting that he be laid to rest near his political mentor CN Annadurai.

After the TN government conveyed its decision through the press release, the DMK submitted a petition to the Chief Justice (Acting) of the Madras High Court, Huluvadi G Ramesh, against the government’s decision to deny a spot in Marina. The Justice scheduled a hearing at his residence at 10.30 pm on Tuesday. The hearings went on till 1 am on Wednesday and the court was adjourned till 8 am on Wednesday by which the state government was to file the counter affidavit.

The petition was filed by advocate RS Bharathi, who is the Organising Secretary of the DMK.

“One of the forefathers and founder of the DMK,  Annadurai, former chief minister of Tamil Nadu was laid to rest in Marina beach and the place is called as Anna Square. The great ideologies of the great leaders of the Dravidian movement was taken forward by our great leader Dr Kalaignar M Karunanidhi, who has been the Chief Minister of Tamil Nadu five times and who is regarded as guardian of social justice by Tamilians all over the world,” read his petition.

The petition also stated that Kalaignar’s contributions to the cause of Tamilians and their welfare are countless.

“It is only right and  proper to give this leader his due respects by laying his mortal remains next to his beloved Arignar Anna to fulfill the wishes of millions of Tamilians. It is humbly prayed that this honourable court may be pleased to issue a writ, direction, order, particularly in the nature of Writ of Certiorarified mandamus calling for the records of the impugned press release by the first respondent herein by PR number 532 dated 7.8.2018 and quash the same and consequently issue a direction to the respondents to permit and allot land to lay the mortal remains of Dr Kalaignar M Karunanidhi, former Chief Minister of Tamil Nadu on the Marina beach within the precincts of burial place of former leader of DMK party and former chief minister of Tamil Nadu Thiru CN Annadurai at ‘Anna Memorial’ at Kamarajar Salai,” read the petition. In the counter affidavit filed by the state government on Wednesday, it said that the TN government is ready to allot land in Gandhi Mandapam and he will be given state honours.

“It is very relevant to note in the present context that all the above leaders ( MG Ramachandran, CN Annadurai and J Jayalalithaa) had deceased during their tenure as the Chief Ministers of the state. However, in so far as former Chief Ministers, they have always been provided, if they made a request or by decision of the Government, at the Gandhi Memorial Campus at Sardar Patel Road,” stated the counter affidavit.

The counter affidavit further stated,”I further submit there is a memorial for late Thiru Kamaraj, who remained Chief Minister for three consecutive terms, winning elections in 1957 and 1962, at Gandhi Mandapam…I am informed that at the time of demise of Thiru K Kamarajar, the Chief Minister of that period Late Thiru M Karunanidhi had allotted the said place and not any site on Marina since Thiru K Kamarajar was not a sitting Chief Minister when he passed away.” “It is understood that the petitioner is wantonly feigning ignorance of the reason given regarding the allocation of the said place demanded,” stated the counter affidavit.

After the decision by the government denying DMK’s request was made public, there have been voices from various quarters that Kalaignar must be laid to rest in Marina. DMK cadres took out a procession shouting, ‘We want Marina’ as Karunanidhi’s body was taken to his residence in Gopalapuram from Kauvery hospital.

Here’s the video of Stalin getting emotional :

While making his campaign speech at Melur of Madurai district, Chief minister Edappadi K Pazhaniswamy replied to the derogatory comment made by DMK's A....