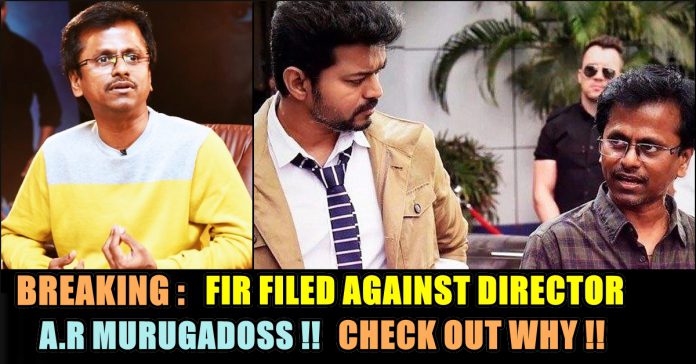 AIADMK legislator Rajan Chellappa staged a protest against the screening of the movie at a cinema in Anna Nagar, Madurai. “People of Madurai do not want this film as it corrupts them. Until the scenes are removed, the people of Madurai will not allow this film to be screened ” Chellappa told reporters. Months after the controversies surrounding Sarkar, which was opposed by the state-led AIADMK government for the scenes that were critical of the government, an FIR has been filed against the film’s director AR Murugadoss.

The Chennai police has booked film director AR Murugadoss under three IPC sections, including charges of instigating violence against the State. Sources said the FIR was registered on Sunday based on a complaint lodged by one Devarajan on November 8. Devarajan had alleged that the movie Sarkar directed by Murugadoss, promotes enmity towards the government and instigates violence.

The director had subsequently moved the Madras High Court seeking protection from the case and the court had issued orders restraining the police from arresting Murugadoss. The Madras High Court in its interim order on November 29, allowed the police to inquire into the complaint against the film and its director and register a case if cognisable offence was made out.

Police sources said the FIR against Murugadoss was filed under IPC sections 153A,  505 (1) (b) (b) and 505 (1) (c). The members of the ruling AIADMK were up against the movie when it was released since it had a few scenes critical of the freebie schemes of the government. Earlier, Madras high court had adjourned an anticipatory bail filed by the director and the Tamil Nadu government had insisted that the director should give an unconditional apology and a written statement declaring that he would not mock the government and welfare schemes in his films.

The judge had then given two weeks time for the state government to a file a case if he had made any cognisable offence. The judge also stated that Murugadoss should not be arrested till then.

Previous articleSouth African Fast Bowler Dale Steyn Asked “What’s Happening ??” Check What Ajith Fans Did !!
Next articleRemember Abarnathi, One Of The 5 Finalists In “Enga Veetu Mappillai” ?? Check How She Wished Arya On His Birthday !!

First Ever BIGG BOSS Contestant To Meet Madhumitha In Her House !!

Every contestant of Bigg Boss season 3 Tamil became busy in meeting fans and in keeping their social media active. But Madhumitha, the only...