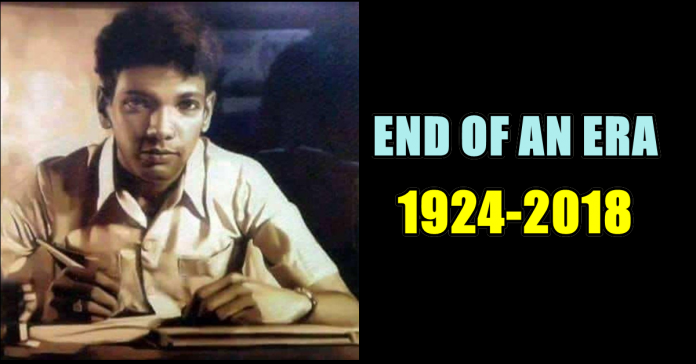 “Despite our best possible efforts by our team of doctors and nurses to resuscitate him, he failed to respond. We profoundly mourn the loss of one of the tallest leaders of India and we share the grief of family members and fellow Tamilians worldwide”, the hospital said. Karunanidhi largely stayed away from active politics since he underwent a tracheostomy in 2016.

Now, the DMK will look to MK Stalin, one of Karunanidhi’s sons, to lead the charge as Tamil Nadu prepares to vote in next year’s general election. Stalin is already the party’s working president.

Even in his nineties, Karunanidhi was still addressing public meetings; he once said even turning 100 wouldn’t stop him from working for the people. He weathered all manner of challenges and setbacks — including MG Ramachandran’s expulsion from the DMK in 1972, and a squabble involving Stalin and another son, Azhagiri (whom Karunanidhi expelled). His party has faced charges of corruption, beginning with the Sarkaria Commission’s indictment in the late 1970s to the 2G spectrum case.

The DMK’s “Kalaignar”, meaning scholar of arts, was born Dakshinamurthy on June 3, 1924, in Thirukkuvalai, a village in present-day Tamil Nadu’s Nagapattinam district. He would later credit “confidence” and “strong determination” for his rise from humble beginnings to high office.

Karunanidhi’s life in politics began early. When he was just 14, he joined the Justice Party and a fledgling anti-Hindi agitatation. When CN Annadurai split with EV Ramaswamy to form the DMK, Karunanidhi was one of its founding members.

A shrewd political mind wasn’t Karunanidhi’s only claim to fame; he was as potent with the pen as he was from the pulpit. In the 1950s, he began writing dialogue and screenplays for Tamil films. His debut was Sivaji Ganesan’s Paraasakti, which features a court testimony — “I ran, I ran” — that has become something of an object of popular culture. He wrote historical and reformist stories propagating the Dravidian movement’s socialist and rationalist ideals.

His debut in the Tamil Nadu legislature came in 1957; he was elected from a district where he led an agitiation in support of local farm workers. Then, his rise was meteoric: Deputy leader of the Opposition in 1962, Annadurai’s public works minister in 1967, and chief minister in 1969 (after Anna’s death).

He is survived by his second and third wives, Dayalu and Rajathiammal, and six children – Muthu, Azhagiri, Stalin, Selvi, Thamizharasu and Kanimozhi.

Previous articleTeary Eyed Visitors !! Tasmac Ordered To Be Shut Down Right Now !!
Next articleList Of Celebs Who Mourns For Kalaingar & Wants Marina For Him !! The Long List Never Ending !!

Chief Minister Edappadi K Pazhaniswamy who has been meeting people ahead of the upcoming Tamil nadu assembly elections, recently conducted his election campaign in...