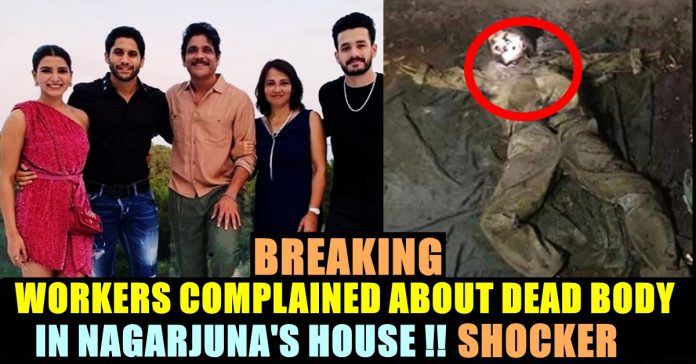 Nagarjuna is one of the most loved actors by Telugu movies watching audience. The actor who is busy in acting in films and hosting Bigg Boss Telugu show made headlines for completely a wrong reason. A highly decomposed body found at the 60 year old actor’s farm house which is located in Papireddyguda in Telangana’s Rangareddy district on Wednesday.

Keshampet police, under whom the jurisdiction falls, suspects that the death could have taken place six months ago and they also believe that it could be a suicide. Reports suggests that Nagarjuna bought the 40 acres land recently and left it unused for several years. The actor who decided to do organic farm cultivation in the land sent some farm workers to prepare land accordingly.

The workers who went there sensed a strange smell from an abandoned building and when they went in, to their shock, they found a skeletal remaining of a human dead body which was totally decomposed. They immediately informed the Village Revenue officers and rightfully informed the local police who came to the scene to inspect.

The police investigated with the help of Dog squad and CLUES team and found the forensic evidence. The investigation is still underway. The police have reportedly filed a case of suspicious death under section 174 of the CrPC on Thursday. As they haven’t identified the person yet, the police are reportedly going to check the list of missing people in the village.

Lately, the Telugu superstar made news as he ringed in his 60th birthday on August 29. The Manmadhudu actor chose Ibiza Island in Spain to celebrate his special day with family Naga Chaitanya, Samantha and Akhil, and some of his close friends.

On the work front, the 60-year-old actor is currently busy hosting Bigg Boss Telugu 3. He was last seen in Manmadhudu 2, pairing opposite Rakul Preet Singh. The actor and his family members which includes actress Samantha are yet to react on this whole scenario.