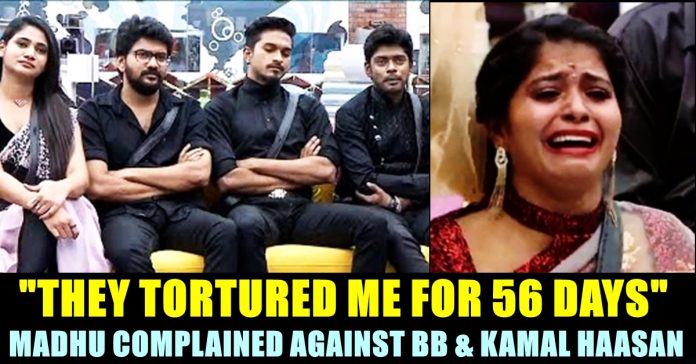 When we all having a sigh of relief as the controversies of the Bigg Boss show has came to an end as the contestants are concentrating on the task and winning the game show, one of the two terminated contestants of this season, Madhumitha has filed a complaint against the show in Police station.

The reality show, Bigg Boss Tamil 3 kick-started from June 23 and the show is already grabbing the attention over a lot of reasons.  Madhumitha was terminated from the Bigg Boss house due to breaking the rules of the show. In her complaint Madhumitha has stated that her co-contestants tortured her for 56 long days and said that it led to mental depression. She also said that they forcefully sent her out of the show on the 56th day.

She even expressed her disappointment on the host of the show, Kamal Haasan, for not questioning her housemates about this issue. As soon as this news surfaced, it is going viral in social media and receiving reactions from its users.

It all started when Madhumita brought the topic of male domination up again in the house. Saturday episode of that week started with an announcement of Madhumitha getting terminated because of the decision she made. During an argument of Madhumitha with the housemates after a task, she hurted herself to prove a point she stated. This made Bigg Boss to terminate immediately.

Even during interacting with Kamal Haasan, Madhumitha stood with her decision and argued with the host himself. However, Kamal Haasan, sent her by wishing her all the success in the future.

In response to that, Madhumitha conducted a press meet and said she never involved in such act. She also requested Vijay Television to arrange for the meeting they promised soon through this interview.

What do you think on this complaint registered by Madhumitha ?? Comment your views below !!

Previous articleSocial Media User Questioned Ileana About Her Virginity !! Her Reply Was Just Expected !!
Next articlePremji Tried To Flirt With VJ Anjana In Twitter !! Check How Her Husband Responded To Him !!

The first look of Ajith’s upcoming film Viswasam was launched in the wee hours of Thursday. The first poster, features Ajith in two avatars....