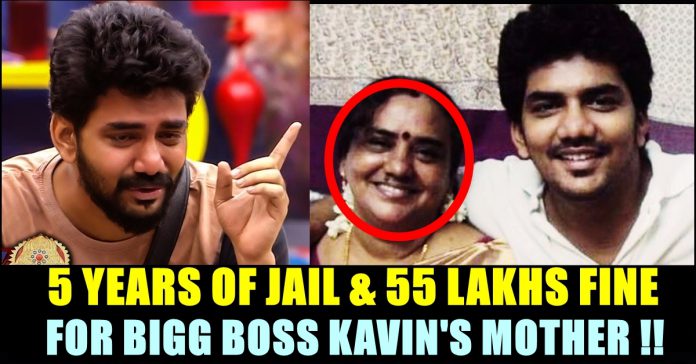 Kavin is one of the most talked about TV star for past two months due to his BIGG BOSS stint. the actor who was approached in last season, decided to take part in this season as he was acting in a movie as protagonist at that time. However, the movie which was titled as “Natpuna Enna nu Theriyuma” release delayed for several reasons and went unnoticed. “Pizza” “Sethupathi” fame Ramya Nambeesan played the role of his love interest.

Now to our shock, a news has surfaced that Kavin’s mother has been sentenced for 5 years jail along with two other family members for chit fund fraud case. The judgement was passed in Trichy court on 29th August.

Dhamayanthi, one of the three females lives in K.K Nagar Trichy. She has a daughter named as Rajalakshmi and a daughter-in-law, Raani. Rajalakshmi is the mother of Kavin, the Saravanan Meenakshi actor. According to reports, Arunagiri, husband of Dhamayanthi and her son Sornarajan had a chit fund company without proper permit from 1998 to 2006. 34 members has been a part of it and paid money.

Reports says that they haven’t paid back the money to any of them and cheated Rs. 32,82,000 to their members. The complaint was registered in Trichy economic crime division on 2007. The investigation started taking place since then.

The news has been creating waves in social media as Kavin has many fans. Unlike other Bigg Boss seasons, this third is seeing controversy after controversy. It is notable that Meera Mithun and Vanitha Vijayakumar has investigated by Police inside the Bigg Boss house. Along with that Saravanan’s immediate termination, suicide attempt of Madhumitha, physical harassment allegation on Cheran, this season grabbing headlines almost everyday since the start.

Previous articleFan Included Prithi Ashwin In This Group Picture Of Indian Team !! Here’s How She Reacted !!
Next articleFirst BIGG BOSS CONTESTANT To React On Kavin’s Mother Getting Sentenced !! Check What She Has To Say !!

Yashika Uploaded Her First Video After 95 Days Of Hospitalization !! WATCH

Actress Yashika who became active in Instagram recently after going through a tragic trauma, uploaded a video of herself recovering after 95 days of...

Tamil actress Trisha who is known among the audience for pairing up with Vijay and Ajith, on Friday, came up with a post updating...