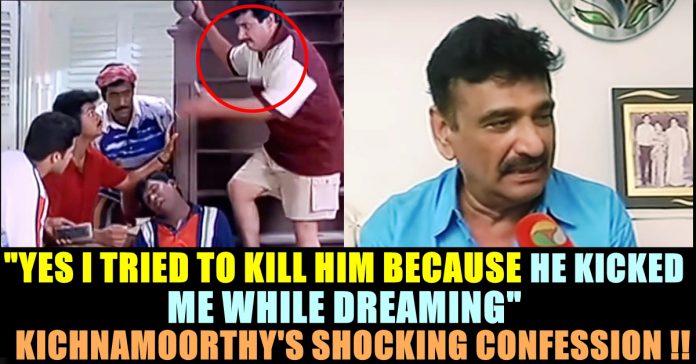 A certain meme about a hammer on social media got fans to talk about this scene from 2001 film, Friends, where Vadivelu gets hit in the head with a hammer. The scene starring Vijay, Suriya and comedian Ramesh Kanna had Vadivelu playing the role of Contractor Nesamani. It is while criticising everyone for their work is when Ramesh accidentally drops a hammer on his head giving him a concussion. What’s funnier is Suriya and Vijay’s reactions to Vadivelu getting hit in the head. Now in the interview with Puthiya Thalaimurai, Ramesh Khanna has talked about the comedy clip going viral. In a funnier note, he gets into the character and makes fun of the entire scenario that happened years ago. In the interview Ramesh says that he dropped the hammer only because of the mischievous behaviour of Nesamani.

“You guys found my plan atlast ?? Leave that apart, Won’t you guys question Nesamani for kicking me while I was dreaming peacefully?? When I asked him job for by friends, he only accepted to give them job as apprentice. Won’t you question that ?? Above all Gopal is still unconscious only because of him. This is why I planned and dropped hammer in his head” said Ramesh Khanna in the interview with Puthiya Thalaimurai.

“If you want to arrest some one for this crime. You must arrest director Siddiqui because of whom I dropped the hammer on Nesamani’s head” said Ramesh Khanna who also contacted Siddiqui to make a sequel of “Friends”.

The Director who is currently making “Big Brother” with Mohan lal director Friends 18 years ago. Vadivelu is one of the most popular comedians down South and one of the most controversial, too. He has given us some of the most hilarious scenes in film and has worked with almost all of the superstars down south. In fact, ‘Who is Nesamani’ is also one of the top searches on Google ever since it started trending on Twitter last night.

Not only meme creators, the storm of Neasamani hit celebrities from the Kollywood industry as well. The hilarious posts helped many people to laugh their heart out. Starting from Harbhajan Singh, Chennai Super Kings spinner to Tamil actor Siddharth, many celebrities reacted on Neasamani’s injury.

What do you think on this interview of Ramesh Khanna ?? Comment your views below !!

Previous articleGovind Vasantha Replied To Ilayaraja’s Accusation In Style !! You Will Just Love It !!
Next articleBBC World Posted About Our Very Own Neasamani !! You Must See These Reactions !!

Parthiban Posts His Account Details For The Fans Of “Oththa Seruppu” !! Check Reactions !!

Sundar C Reveals Why He Stopped Doing Films Like “Anbe Sivam” !! Check What He Said !!

Natpe Thunai marks Aadhi's second film as lead hero and is directed by D Parthiban Desingu, who has also written the story, screenplay and...

“Comali” Director Got Exposed By His Classmate ??

Pradeep Ranganathan, director of "Comali" movie became a subject of severe online troll after making a statement about "filling form" and becoming aware of...