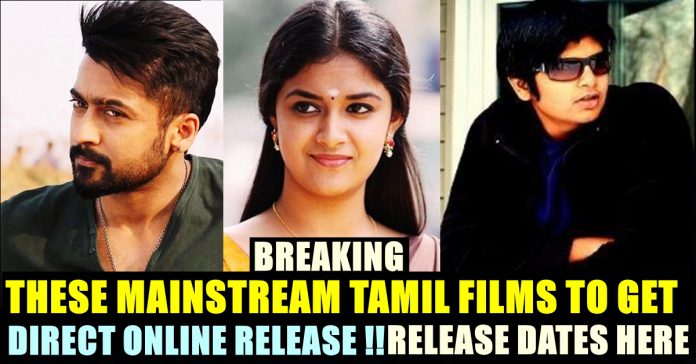 After all the furore that took place between Theatre owners and Cinema producers, first two Tamil films that are going to get a direct online release has been announced by their makers on Friday. Kamal Haasan’s vision of releasing movies directly in DTH is slowly coming into practice, we must say. When the filmmaker tried to release his movies through Direct-To-Home, Tamil film fraternity literally thrown him out of the industry. Now, as the 2020 is progressing, many Tamil films and webseries made by renowned makers are emerging in online platforms.

RK Nagar of Venkat Prabhu gang happens to be the first mainstream Tamil film to have a direct online release. The film which was looking for a theatrical release since past one year, directly got released in Netflix most recently. A film named as Dharala Prabhu of Harish Kalyan and Vivek which is streaming in Amazon Prime, had a theatrical run for just 6 or 7 days. Due to the lockdown crisis, the makers of it decided to release it in OTT platform. Now, release dates two high profile films of renowned makers has been announced.

“Pongmagal Vanthaal” under Suriya’s 2D entertainment which caught in controversy earlier is all set to release on Amazon Prime from 29th of this month. “We are excited and cant wait for you all to watch #PonmagalVandhalOnPrime from 29th May. She isn’t afraid to fight for what is right!” wrote Suriya in his official twitter account to make the biggest announcement.

Earlier, The General Secretary of the TamilNadu Theatre and Multiplex Owners Association, R Panneer Selvam, has announced that their association has decided to not release any film involving actor Suriya or his home production banner 2D Entertainment hereafter as he is hurting the feelings of theatre owners and distributors.

“After hearing about the news from media portals, we got dejected. Films which are made for theatres should get online release only after releasing in theatres. Suriya, broke the norms and sold his film directly to online medium. We severely condemn this act. If the film “Ponmagal Vanthaal” gets streamed in online platform, we ask them to release all their movies in online platforms. We theatre owner didn’t want any of their film. This is our decision” he said in a video. “When we asked him not to release directly in OTT, he didn’t respond to us” he added.

However, the problem seems to be sorted out as Suriya made the announcement public. Meanwhile, Karthick Subbaraj who is known for making quality films, has also announced that one his next production venture “Penguin” is going to be released in Amazon from 19th of June.

“She is destined to rise on 19th June! Join her on an adventure on Amazon Prime” the filmmaker wrote about the film which he produced through his Stone Bench productions.

Sharing the poster, Keerthy wrote “A very special journey that I can’t wait for you all to experience !”

“Why You Laughed?” Fan Questioned Producer For Trolling Kuruvi !!

Actor Pawan's speech on Asuran success meet created huge outrage among the fans of actor Vijay. The actor in the 100 days success meet...

Unseen Video Of Subashree Getting Killed By Illegal Banner !! Father Gets Emotional !!

The news of Subashree's death is creating massive outrage against the ruling party as a banner associated to them caused the accident. The...