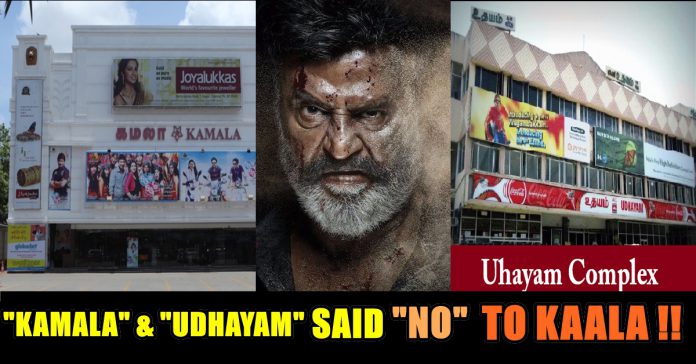 The makers of Rajinikanth’s Kaala planned low-key promotions for the film, for reasons best known to them. If we go by online bookings, people can easily find tickets during the weekend, which is unusual for a Rajinikanth film.

Adding fuel to fire, two Chennai theatres – Kamala Cinemas and Udhayam – announced that they wouldn’t screen the film. The former revealed that they will screen Jurassic World: Fallen Kingdom instead. Gopi, manager of Kamala Cinemas, revealed that the Kaala team had forced him to sell the film’s tickets for a higher price. Since it is against government rules, Gopi refrained from signing the agreement to screen the film.

Wunderbar Films, who has produced Kaala, was quick to do some damage control. They took to Twitter to clarify their stand. They wrote, “Kamala & Udhayam theaters have not expressed their consent to the similar terms that’s been agreed by other cinemas. News going around saying huge demands put forth is absolutely false & baseless. (sic)”

Kamala & Udhayam theaters have not expressed their consent to the similar terms that’s been agreed by other cinemas. News going around saying huge demands put forth is absolutely false & baseless.#Kaala

Riaz Ahmed, public relations officer of Kaala, also stated that the owners of Kamala and Udhayam theatres were not happy with the agreement, which is the reason behind them not being able to screen the flick.

In addition to two theaters in Tamil Nadu, it is speculated that many theatres in Karnataka may not screen the film if the state government doesn’t provide them protection.