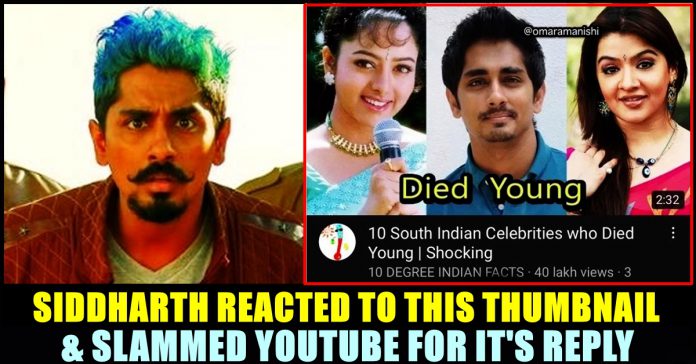 Pan Indian actor Siddharth who is pretty much interactive with his followers in the micro blogging social media site, recently reacted to a fake thumbnail of a you tube video which suggests that the actor is one among the celebrities who died young. The “Boys” actor said that he reported to the youtube management about the video many years ago but received a reply saying that there is no problem with the video. The actor also opened on how he feels about the irresponsible reply of youtube.

Siddharth who debuted to film industry through Shankar’s “Boys”, made his face recognized across the country through his works. Predominantly working in Tamil films, Siddharth’s on screen appearances in Telugu film industry speaks volumes as well. The actor’s performance in Aamir Khan’s Bollywood film “Rang De Basanti” gained him national recognition and the actor went on to work in several other Hindi and Telugu films.

The 42 year old actor who is pretty much active in Twitter with 4.6 million followers, on Sunday, reacted to a tweet that showed a thumbnail of a youtube channel. The picture included the photos of late actresses Soundarya, Arthi Agarwal and also Siddharth’s. A twitter user uploaded the thumbnail as a meme in his handle and tagged the official account of Siddharth himself.

Reacting to the meme, Siddharth said that he reported to you tube against the thumbnail six years ago and received an inappropriate reply which said that there is no problem with the picture. “I reported to youtube about this video claiming I’m dead. Many years ago. They replied “Sorry there seems to be no problem with this video”. Me : ada paavi” read the reply of the actor.

I reported to youtube about this video claiming I'm dead. Many years ago.

They replied "Sorry there seems to be no problem with this video".

Replying to this tweet, official handle of Team youtube made a reply saying “Jumping in – we’ve passed the video along to the team for review and we’ll let you know when we hear back. Appreciate your patience in the meantime.”

Jumping in – we've passed the video along to the team for review and we'll let you know when we hear back. Appreciate your patience in the meantime.

The tweet garnered wide reach with several kind of reactions from his followers.

This moment 🤣🤣😂🤣😷 (just for fun) pic.twitter.com/dfudyUnDaq

But bhaktas happy about that, so they celebrate in whatsapp university. அவனுங்க உலகமே தனி. 😂😁

On the work front, Siddharth is all set to appear in a multi lingual film “Maha Samudram” and in Tamil films “Shaitan ka Bachcha”, “Takkar” and “Indian 2”. Comment your views on Youtube channels making such thumbnails to get views and the reaction of the actor !!

Previous articleDirector Shankar Getting Slammed After All These Years !! Check Why
Next articleFollower Said That Anitha’s Husband Looks Like PUBG Madan !! She Replied

First Ever BIGG BOSS Contestant To Meet Madhumitha In Her House !!

Every contestant of Bigg Boss season 3 Tamil became busy in meeting fans and in keeping their social media active. But Madhumitha, the only...

This Man Donated 11 Lakhs For The Pulwama Martyrs Families By Doing This !! RESPECT !!

Entire nation is grieving the loss of 40+ soldiers who were martyred in a terror attack in Pulwama, Kashmir yesterday. While every Indian is...