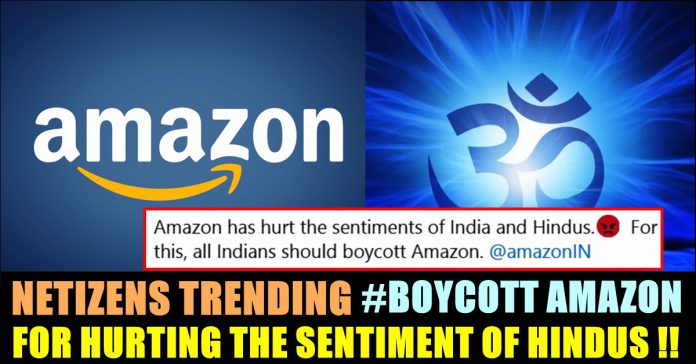 A hashtag saying “Boycott Amazon” is trending in Internet with nearly 10,000 tweets from the users of Twitter. The prominent reason behind the hashtag seems to be a product being sold in the online shopping website. Devotees of Hindu religion highly believing that the product disrespected the sign that is meant to utter while praying to Hindu Gods. Posts slamming Jeff Bezos, CEO, and president of Amazon are also flooding the feed of the micro blogging social media site. Not many days ago, people of the same religion demanded Tanishq jewellers to be boycotted for an advertisement they made.

Since morning, people are expressing their displeasure over Amazon for selling doormats printed with the spiritual symbol of “Om”. Due to the enormous tweets that surfaced regarding the same, “Boycott Amazon” became one of the top trends on Tuesday.

The doormat which is being subjected to controversy, is green in colour with a symbol of “Om” in white and green colour combination. It was dubbed as “Yoga Lotus doormat, rear front door mat, absorbent mud entrance” on a foreign version of Amazon with a price of 15.78 euros.

Here’s the screenshot of the product :

People who got upset, urging others to stop using Amazon and suggesting them to use Flipkart instead. Along with the screenshot of the doormat, screenshots of other controversial pictures are also being shared in Twitter against Amazon. Some tagged the official twitter account of Jeff Bezos to condemn him and few morphed his picture in the door mat to express their emotion.

“We too have religious sentiments. Don’t violate Section 295A. The section says that any person deliberately and maliciously intended to outrage reli­gious feelings can be punished for the term prescribed or extended upto 3 years.” wrote Gaurav Goel, a lawyer and spokesperson of BJP party, in his tweet.

We too have religious sentiments. Don't violate Section 295A.

The section says that any person deliberatly and maliciously intended to outrage reli­gious feelings can be punished for the term prescribed or extended upto 3 years.#BoycottAmazon

Check out some of the reactions from the people who wants the site to be boycotted :

Just removed all the products from the cart which I need Urgently. I'll order same from any other shopping platforms like Flipkart etc. Amazon losted a loyal/regular customer because of their careless duty. #BoycottAmazon pic.twitter.com/xaWZ3HX4Wv

Untill they sell a doormat with "cross" or with "Crescent & Star" we will not take this bullshit by any of the brand/organisation which tries to defame "Sanatan dharm" through their platform#BoycottAmazon @KapilMishra_IND @Rajput_Ramesh @VertigoWarrior pic.twitter.com/ExGElccHt1

Amazon has hurt the sentiments of India and Hindus.😡 For this, all Indians should boycott Amazon. @amazonIN @amazon #BoycottAmazon pic.twitter.com/RyaylBnflt

@JeffBezos see image below and tell me would this hurt religious sentiments of Hindus ? the answer is yes #BoycottAmazon what kind of products are you selling in @amazon ? . You know what happened in France a while back . pic.twitter.com/xtTQiby5qg

Amazon is an American multinational technology company based in Seattle, Washington, which focuses on e-commerce, cloud computing, digital streaming, and artificial intelligence. It is considered one of the Big Five companies in the U.S. information technology industry, along with Google, Apple, Microsoft, and Facebook. Comment your views on these reactions against the company !!

“Use Only Hindi Or English” Southern Railways Sent Circular To It’s Staffs !! Check Why !!

Southern railways sent circular to station staff and train operation controllers to communicate only in English or Hindi while communicating officially. Recently the topic...

Follower Asked “Adhithya Varmaa” Heroine To Gain Weight !! Check How She Shut Him Down !!

Female celebrities shutting down their abusers in online media became common and it is happening in daily basis. In many occasions, female actresses, exposed...