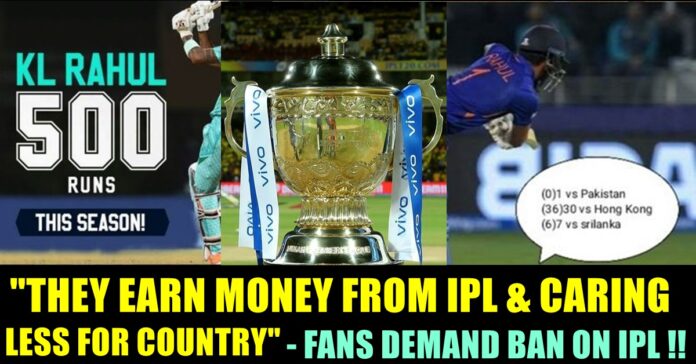 “Boycott IPL” Is Trending After India Almost Got Eliminated From Asia Cup !!

Hashtag “Boycott IPL” is trending in the micro blogging social media site after team India got unofficially eliminated from the ongoing Asia cup tournament. The team which is surviving with outside chance to enter the next stage of the tournament, got defeated back to back by Pakistan and Srilanka. Fans who got extremely upset, wanted IPL to be banned as they think players are not concentrating on the International matches.

On Tuesday, team India got outsmarted by Srilanka after getting defeated by Pakistan in the previous match. Sri lanka registered a six wicket win against the inexperienced bowling line-up. This left Indian team to expect Afghanistan’s win against Pakistan and Sri lanka’s win against the same team in the upcoming matches to qualify for the next stage.

With very less possibilities for the team to get into the next stage, fans started blaming the cash rich IPL league for the poor performance of the players. Ahead of the next T20 world cup which is scheduled to be played later this year, netizens want IPL to be banned.

Its time to say #Goodbye to IPL. Bcoz of IPL players like Bhuvi Chahal KL Rahul and #RishabhPant are not focusing on international cricket.#BCCI and Coach Dravid take note of this and include match winners Shami Ashwin in T20 World Cup#IndianCricketTeam #INDvSL #BoycottIPL pic.twitter.com/IoS49bVs4y

“The day from which Indian Public Stop watching IPL the day from. That this Useless team start playing for the country & pride not running for the money” a social media user said whereas another one wrote “please boycott IPL this year and teach these greedy players some lesson”

The day from which Indian Public Stop watching IPL the day from. That this Useless team start playing for the country & pride not running for the money

Guys it’s time to seriously #boycottIPL , till the time they don’t win an ICC event .

They don’t deserve the fandom they are getting .

This team is a big Let Down .

They earn money from IPL invest in other business.busy in doing ads.
Please boycott IPL and all the series.If they can’t able to perform in big tournament then why we should waste our time.
KL rahul and Rishabh pant must drop from all series. #boycottipl

This is seriously the most relevant Boycott trend so far!!

No one should have any doubt that Indian cricket has been destroyed because of IPL. We must have to boycott IPL. #BoycottIPL

We should boycott actually ipl and the business minded cricket team of India. Now the cricket is all about business.Even Hongkong is better. #boycottipl

Players earn enough money in ipl, they don’t have a strong reason to play for country
Even after low scores and losing matches for india you will see many players laughing and cracking jokes .
We indian fans get so disappointed every time and no one really cares #boycottipl

Richest BOARD 🌍@BCCI & @IPL CALM DOWN
YOU ARE NOT THE GOD!!!#bcci#BANIPL#BoycottIPL#INDvSL #RishabhPant#Bhuvi#SackRohit#INDvsSL