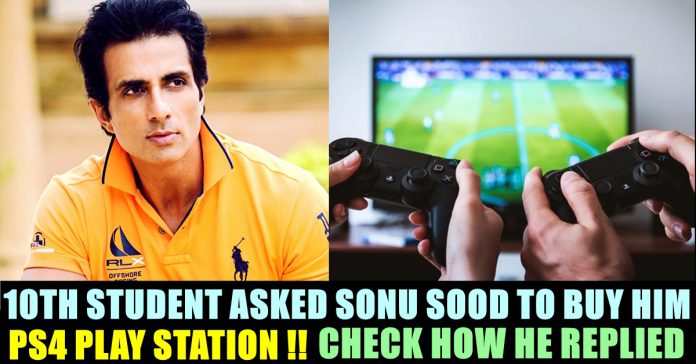 Now, a boy named as Nilesh Nimbore whose bio says that he is a 10th class studying student, asked Sonu Sood to present him a PS4, a gaming system that is widely used by youngsters to play advances video games that supports HDR10 High-dynamic-range video and playback of 4K resolution multimedia. The starting price of the gaming system is Rs.27,990. Read : Engineering Graduate Sold Vegetables Due To Lockdown Crisis !! Sonu Supports

@SonuSood Please Sir Can you give a PS4. All the children around me are enjoying the lockdown by playing games .Sonu sir can you help me Please Sir😟😟😧

Check out the screenshot of the boy’s bio :

Sonu who could have got mentioned due to the tag, saw the tweet and decided to reply to him. The actor said that the boy is blessed not to have a PS4. He further stated that he could buy him books to read instead of a PS4. “If you don’t have a PS4 then you are blessed. Get some books and read. I can do that for you” Sonu’s reply read.

This reply from the actor went viral within minutes with reply tweets thanking him for guiding young minds in a correct way. Few even slammed the boy for taking Sonu for granted. Check out some of the reactions for his tweet :

Thats cool @SonuSood Its really amazig that a celebrity like you is actually responding and giving correct advise to childrens. Personally Thankful to you for all the help you have done to all in need.

I am shocked how people can create ruckus by stating non sense demands. He helps that doesn't mean you should ask anything. If you can't appreciate him or don't wanna contribute along with him then at least one don't come up with such illogical demands.

@NileshNimbore Nilesh, he's helping the poor and needy in tough times with his hard earned money.
What you are asking him is a luxury item. Pl think bfr making such absurd requests. He does not has a money tree for ure luxury requests. Go study a bit and try to earn urslf. 👍

Very apt reply to this dumb boy , even I don't have smartphone, I use Twitter on my mummy's phone when available. Read books and play other games , spend time with family…only smartphone is not everything

Comment your views on this demand made by Nilesh and Sonu’s reply to him !!

Previous article740 Tonnes Of Ammonium Nitrate Stored In Chennai As In Lebanon ??
Next articleChennai’s Leading Theatre Owner To File Defamation Case Against Meera ??

FIR Filed Against The Man Who Threatened To Rape This Famous Director/Actor’s Daughter !!