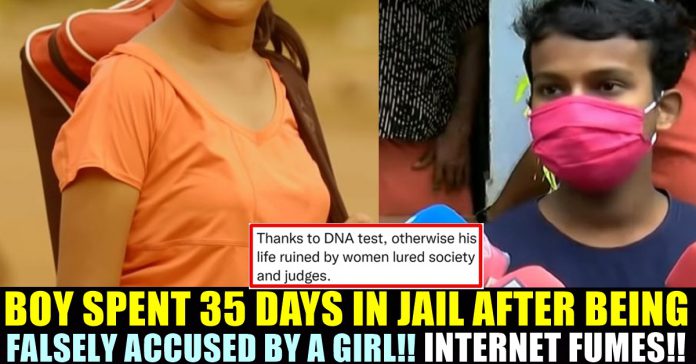 18-year-old, 12th-grade student, Sreenath has been given bail after the DNA tests went against the claims made on him. After 35 days of spending 35 days in jail.

Sreenath resides in Tennala near Tirurangadi in Malappuram with this family. He was arrested for raping and impregnating a 17-year-old girl living in his locality. He has known the girl from school as she is a junior at his school. He was arrested under POCSO Act and therefore he did not get bail. Sreenath has been arrested based on the statements made by the minor girl. The girl has been repeating his name in the counseling and investigations. Sreenath has repeatedly said that he did not assault the girl and he is not responsible for this.

Following this, a DNA test was taken. Through the DNA tests, it has come out that the 18-year-old is not at fault. Therefore, Sreenath was released from custody on August 28, 2021. After the release, Sreenath has said that he has been through hell, yet he is relieved that he was given bail.

The police handling the case has said that the girl has reported the date of the incident and location which turns out to be Sreenath’s house. Police further said that she has given the statements to the gynecologist, woman police officers, and a statement to the magistrate under Section 164 of the CrPC. They have also said the case will still be probed and there are possibilities of one more accused involved in this.

Despite the claims from the police, this news of Sreenath’s release has comforted people. People are also infuriated for imposing a false rape case on a teenager. Few people have said that action should be taken against the girl for making false claims.

He's only 18 years old. Thank god for the DNA test else his life would be finished before even starting. pic.twitter.com/XJx1TtKMOS

Forgot to add – case isn't yet over. He's just been given bail. The trial will still happen because in India what the girl or woman "says" in her statement under 164CrPC is EVIDENCE itself even if all other evidence defy that statement. So trial will run basis her statement.

It is sad that innocent boys/men suffer, 4d doings of a oversmart girl/women. Why she didn't get the real culprit arrested, is best known to her. But she has managed to malign n spoil d life of a young boy. The trust between real friends will suffer, because of such cases.!

Great news for the young lad. Girl on the other hand is gonna have a child and raise him as a single mother. Strange she still doesn't wanna name the real father. It isn't hard to remember who all you slept with when you're 17 😂

I wonder if the girl will be charged for making false allegations against that boy.

Was the girl punished?? I strongly believe that her name shud be publicised so that taking advantage of her gender she doesn't end up doing this to someone else

Why the hell bail? The kid should have been released and he is free to go and most importantly he should have paid compensation for the damage caused by the girl and police. What more proof required than a DNA test?

Lucky to get bail in 35 days. Some innocents spent years in custody for false allegations. The consequences of error in criminal justice is too costly. It will take more than 3.5 years to get out of 35 days trauma.

Previous articleYouth Sent Obscene Pictures Of His Ex-Girlfriend To Her Current Boyfriend!! Case Filed Against 4
Next articleKohli Once Again Removed Ashwin From The Team !! Prithi Ashwin’s Tweet Goes Viral