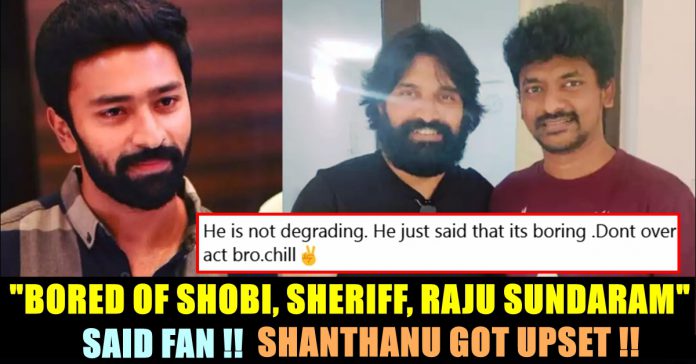 Actor Vijay’s upcoming film which is tentatively titled as “Thalapathy 65” is going on floors very soon and the updates on the details of the cast and crew is surfacing in Internet in daily basis. Most recently, it was announced that Pooja Hegde is going to play the female lead in the Nelson Dilipkumar directorial. Recently, another announcement regarding the dance choreographer for one of the songs surfaced in social media platforms. It was announced that Jaani Master is going to compose dance steps for a song in the Vijay starrer.

“All excited to join #Thalapathy65 team, ThanQ #Thalapathy @actorvijay Sir, Nelson Dilipkumar Sir for believing in me. will surely make the opportunity totally worth it. Rehearsals for a Super crazy song begins on 24th April & shoot to commence from May 3rd-9th” Dance choreographer Jani wrote in his tweet and deleted it immediately for unknown reasons.

Jaani Master predominantly worked in Telugu film industry and worked with Nelson Dilip kumar in his upcoming film “Doctor” which has Sivakarthikeyan in the lead role. As soon as the news broke out on media, fans of actor Vijay started trending it with various kind of reactions. One of a fan uploaded a tweet saying that it is a good decision from the makers of “Thalapathy 65” as he got bored of ace dance masters such as Shobi, Dinesh, Sridhar, Sathish, Sheriff, Raju Sundaram.

Many fans of actor Vijay welcomed this tweet of the fan and also suggested some of the dance choreographers they wish to work with Vijay. However, actor Shanthanu, one of the ardent fans of actor Vijay, came up with a reply to the tweet expressing his disappointment over the opinion of the fan.

Shanthanu said that the choreographies of the mentioned masters were enjoyed by the fans for so many years and asked the follower whose bio says that he is a movie follower of 6 languages not to degrade others to encourage Jaani master.

“It’s the choreography of #RajuMaster #ShobiMaster #SridharMaster #DineshMaster #SatishMaster #SheriffMaster & many others we have enjoyed for so many yrs..so never say that. Jaani master is extremely talented as well , let’s encourage him too but not at d cost of degrading others” Shanthanu’s tweet said.

It’s the choreography of #RajuMaster #ShobiMaster #SridharMaster #DineshMaster #SatishMaster #SheriffMaster & many others we have enjoyed for so many yrs..so never say that
Jaani master is extremely talented as well , let’s encourage him too but not at d cost of degrading others https://t.co/IjNVjvXLOB

Shanthanu acted with Vijay in “Master” and identifies himself as an ardent fan of the actor. Check out some of the reactions for his tweet below :

95% of Vijay movies choreographers are one among the mentioned list only.. So time to breath some fresh air is what he meant.. Which is true to some extent..

He is not degrading. He just said that its boring .Dont over act bro.chill✌

There is nothing degrading here..being bored and degrade is entirely different.. take a chill pill..

Its his opnion brother
He just said he is bored