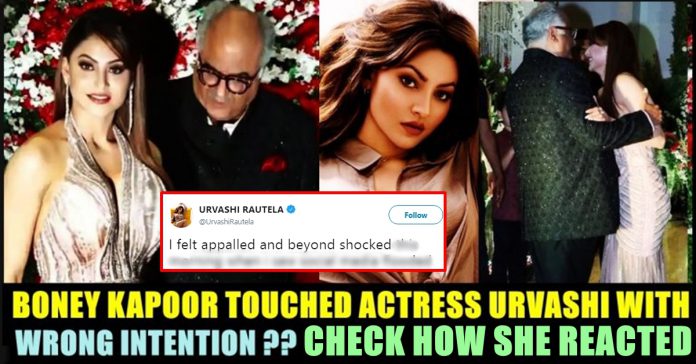 From that same event, a video of Urvashi and Boney Kapoor has gone viral because of a very particular reason. In the video, Boney and Urvashi are posing together for the paparazzi, as celebs often do at such parties and events. But at the end of their photo session, the two shares a side hug and Boney is seen patting Urvashi, inappropriately.

The video spread like wildfire on social media, causing a section of social media users to point out that, “this is what casual sexual assault looks like.” One social media user labelled the video “disgusting,” while another wrote: “If it had been any other common man, she would have slapped him by now, but clearly not the same reaction towards such a grand producer.” The speculation led to Urvashi finally reacting to the video. Sharing a snapshot of a ‘news’ article which talked about Boney Kapoor’s “inappropriate” touch in the video, she wrote on Twitter: “Presumably one of India’s ‘supreme’ newspaper and this is ‘news’? Please don’t talk about girl power or women’s liberation when you don’t know how to respect/honour girls.”

Presumably one of the India’s ‘SUPREME’ newspaper and this is ‘NEWS’!!??
Please dont talk about GIRL POWER or WOMEN’S LIBERATION when YOU don’t know how to RESPECT/HONOUR GIRLS. pic.twitter.com/QK2Xc2tuSB

After this tweet, she made two more tweets in which she said that she is shocked and appalled to see how people are degrading the reputation of respected Boney Kapoor.

I felt appalled and beyond shocked this morning when i saw social media flooded with trolls of me in a video with respected @BoneyKapoor Sir.
He is a true Gentleman and it makes me feel extremely unhappy and miserable because the social sites/media don’t even think twice before pic.twitter.com/VIzuCeeObV

putting up things or destroying anyone’s reputation. I request all to stop trolling. I honestly respect @BoneyKapoor sir & stand by him and his dignity. #Nototrolls https://t.co/g3zL45dXml While Urvashi might be upset with the reports, Twitterati seemed to be criticising Boney Kapoor’s actions instead. While some are saying that he should be ashamed of himself for such an act others are targeting his age being a factor as to why his act is deplorable.

What do you think on this allegations of the public against Boney kapoor ?? Comment your views below !!