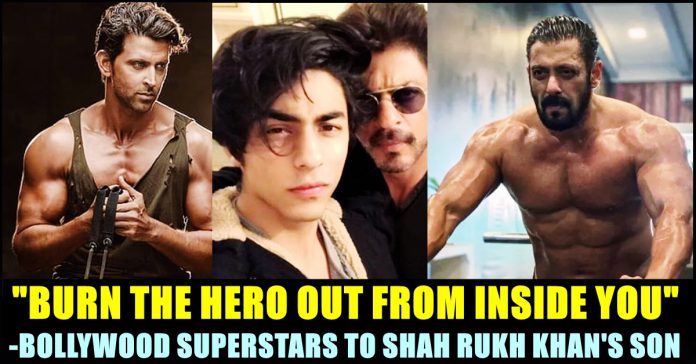 Narcotics Control Bureau arrested Shah Rukh Khan’s son after a raid was conducted on a cruise ship. Munmun Dhachena, Nuour Sarika, Ismeet Singh, Mohak Jaswal, Vikrant Chhoker, Gomit Chopra and Arbaaz Merchant were also arrested along with the Superstar’s son. Ever since Aryan Khan got arrested, celebrities of Bollywood film industry has been extending their support to Shah Rukh Khan and his wife.

The anti-drugs bureau said that the raids produced a haul of 13 grams of cocaine, 21 grams of charas, 22 pills of MDMA and 5 grams of MD. Though there were no drugs were found on Aryan Khan, officials of the anti bureau drugs said that his Whatsap chats are incriminating. The officials, reportedly raided the rave party in disguise on the Cordelia Cruise Ship which was on its way to Goa. Latest report said that Aryan and others were arrested and has been sent to 14-days judicial custody.

Many celebrities from Bollywood has extending their supportive hand to Shah Rukh and his wife. Salman Khan was among the first stars who visited Shah Rukh Khan and Gauri. He was snapped outside the “Chennai Express” actor’s house after the arrest of 23 year old Aryann Khan. He reportedly met Shah Rukh Khan and his wife for sometime and left.

“Only if you have stared the devil in his eyes and kept your calm. Keep calm . Observe. These moments are the makers of your Tom. And Tom is going to have a brilliant sun shining. But for it , you must go thru the dark. Calm , still , owning your own. And trusting the light. Within. It’s always there .
Love you man.” he added in his post.

Alvira Agnihotri, Maheep Kapoor, Seema Khan, Neelam Kothari are some of the other celebrities who extended their support to Shah Rukh and his wife.

Previous articleSamantha Slams Back At Rumours & Speculations !!
Next articleTamil nadu Based Mumbai Fans Thrashing This Celebrity For His Tweet Against Mumbai !!