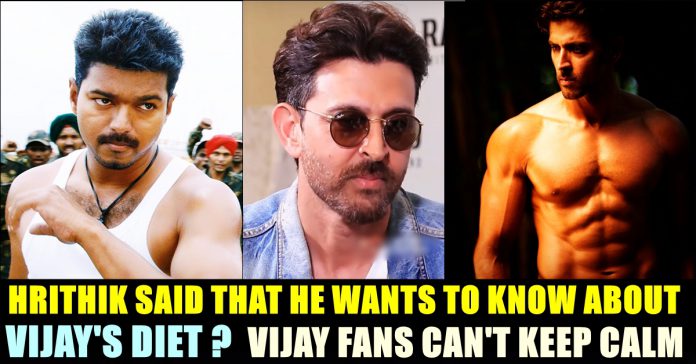 Bollywood Superstar Hrithik Roshan who is known among audience for his movies, has landed in Chennai to promote RADO watches. Being a brand ambassador for the product, Hrithik participated in an interaction with the popular Tamil youtube channel Galatta. In his interaction with Mathevan of Galatta, Hrithik has said that he wants to know the diet secrets of Vijay before he goes on floor to dance.

Actor Vijay who is making headlines lately for various reasons has made it one more time as Hrithik Roshan expressed his views on his dancing skills. Actor Vijay is one of the very few actors who has huge fan following in South India. Having acted in more than 60+ films, he is in the top race to become the highest paid actor in Kollywood. His most recent film is Atlee’s BIGIL which was announced as a blockbuster and the actor finished shooting for his upcoming film “Master”.

In this interview, Hrithik Roshan who praised Tamil film industry for making quality films. He said that he has a lot to learn from Tamil film industry. When he was asked to say one word about South Indian star Allu Arjun’s dancing skill, Hrithik who got excited said “Energetic, Strong, Inspiring”

When he was asked to say one word about actor Vijay’s dancing skill, the “Krish” actor said that he thinks that they (Vijay, Allu Arjun) have some secret diets because every body’s energy level is so amazing. I would love to learn what they eat before dancing” he said in the interview.

As soon as the video released, fans of actor Vijay who became extremely happy started sharing the video with joy in social media platforms. Check out some of their posts below :

On the work front, Vijay is all set to appear in Master directed by Lokesh Kanagaraj. The film which is going to be produced by XB film creators, it has musician Anirudh as composer and Vijay Sethupathi is going to do the role of main antagonist. The film also has an ensemble casting which raised the expectation level of the fans. As far as Thalapathy 65 is concerned, fans are very much excited to know about the details of the filmmaker. It is widely believed that “Irudhi Suttru” fame Sudha Kongara is going to direct the film.